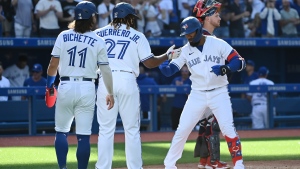 Toronto Blue Jays' Teoscar Hernandez, right, celebrates with Bo Bichette (11) and Vladimir Guerrero Jr. (37) after hitting a three-run home run in the fourth inning of an American League baseball game against the Minnesota Twins in Toronto on Saturday, Sept. 18, 2021. THE CANADIAN PRESS/Jon Blacker

Three members of the Toronto Blue Jays have won the 2021 Silver Slugger awards.

Guerrero Jr., Semien, Hernandez, Bo Bichette, and Lourdes Gurriel Jr. were the five players from the Blue Jays nominated after their 91-win season.

Each of the 18 award winners will receive a three-foot tall crafted Silver Slugger Award. Each trophy bears a custom engraving of the recipient’s name, along with the names of the other Silver Slugger winners in that player’s league.

Hernandez is getting the Silver Slugger for the second consecutive season.