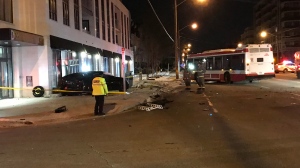 Police are investigating after a vehicle crashed into a condo building in North York. (Michael Nguyen/ CP24)

Three people were transported to hospital after a vehicle crashed into a condo building in North York.

Reports from the scene suggest that the driver of an Audi cut in front of a TTC bus near Sheppard Avenue West and Maxwell Street and then crashed into a condo in the area shortly after 11:30 p.m.

The driver of the vehicle and two others were taken to hospital for treatment.

The area was closed to traffic for the police investigation this morning.

Police have not said if any charges will be laid.