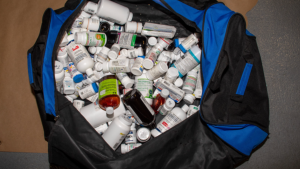 Peel Regional Police say a call from a concerned Brampton resident about seeing a firearm led to the arrest of three people who are members of a group allegedly involved in several pharmacy robberies in Peel Region this month.

The call came in on Wednesday afternoon regarding several males observed to be handling a firearm near Wanless and Brisdale Drives, police said.

Uniform officers and members of the tactical and K9 units responded to the area and subsequently took three males into custody. Police said two loaded firearms were also seized.

Police later learned that the three suspects are members of a group who they say were involved in robbing eight separate pharmacies in the region that occurred between Sept. 2 and Sept. 19.

They added that some members of the group are also believed to be responsible for a pharmacy robbery in Vaughan on Sept. 19.

As a result, Peel Regional Police and York Regional Police recovered two stolen vehicles that were allegedly used in the robberies and other offence-related property, including a large number of prescription narcotics.

On Thursday, police announced that they laid a total of 56 charges in connection with the case.

The first suspect, identified as 18-year-old Lenroy Huggins of Toronto, is facing 28 charges, including eight counts of robbery and nine counts of possession of property obtained by crime.

Meanwhile, the second suspect, a 16-year-old Toronto boy, is facing 21 charges, including four counts of robbery and five counts of possession of property obtained by crime.

He and the third suspect, a 17-year-old Brampton boy, cannot be identified under the terms of the Youth Criminal Justice Act.

The Brampton teen is facing seven charges, including two counts of unauthorized possession of a firearm.

“This was an excellent demonstration of the value of our community in responding to violent crime,” Peel police Deputy Chief Nick Milinovich said in a statement. “Combined with coordinated police response, this has ended a violent crime spree while removing another two illegal firearms from our streets.”

Police said the investigation is ongoing as they search for other outstanding suspects. They did not say how many more are being sought in the case.