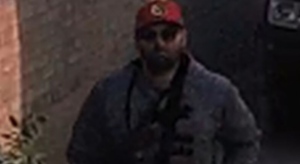 A person of interest believed to have ditched a vehicle in a Scarborough hit-and-run incident is pictured in this handout photo. (Toronto police)

Toronto police say they have located a suspect vehicle and that they are now looking for a fourth person in a hit-and-run incident that seriously injured two women and a toddler in Scarborough on Sunday.

The vehicle was located Monday night following a tip from the public.

"Earlier this evening just before 6:30 p.m., a business owner in the area of St. Clair Avenue East and O'Connor Drive made us aware of a vehicle that was in the parking lot of that business," Const. Allyson Douglas-Cook told CP24. "Our officers attended and they realized that it was the suspect vehicle from yesterday's collision."

In addition to having located the vehicle, police said that they now have images of the person believed to have ditched the vehicle.

"We have security camera images of the person who abandoned the vehicle and he is now being considered a suspect," Douglas-Cook said. "We're releasing his image and asking for assistance locating and identifying him."

She said police do not believe that the person who ditched the vehicle was involved in the collision.

The incident itself happened just before 10:50 a.m. on Oct. 13. According to police, a grey Dodge Journey was eastbound on Ellesmere Road, approaching Pharmacy Avenue, when it ran a red light, crossed through the intersection and mounted the sidewalk.

Police have said that the vehicle stopped on the sidewalk, just east of where the pedestrians were struck. Investigators believe two occupants exited the vehicle, walked around and assessed the scene.

One person then got back into the vehicle and fled southbound on Pharmacy Avenue, police said. The other person fled on foot.

The suspect vehicle bore the Ontario license plate ANXC 265. The impact of the collision dislodged the front license plate from the vehicle and police found it at the scene.

Yesterday, investigators said they were looking for three persons of interest in the case:  49-year-old Cory Munroe, 34-year-old Derek Desousa, and 30-year-old Amanda Rioux. All are from Toronto.

"We're asking them to contact a lawyer and turn themselves in," Douglas-Cook said.

A person of interest believed to have ditched a vehicle in a Scarborough hit-and-run incident is pictured in this handout photo. (Toronto police)