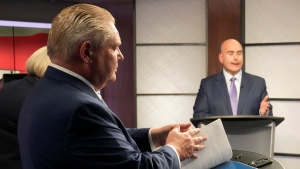 Here are the top moments from the debate:

One topic of tension was physically present on the debate stage: a binder sitting on Ford’s podium.

Every so often, the PC leader would glance down at his notes for a little added support. He was the only person to bring notes for the debate.

“If you've watched debates across the country, provincially, federally, municipally, there's nothing wrong with putting notes to make sure you're organized,” Ford said in a post-debate scrum.

While Horwath acknowledged that each party leader did have a sheet of paper in front of them, she said it was just a set of instructions, which she was grateful for, along with her own blank sheet paired with a pen to scribble down debate points.

“Mr. Ford was beside me. He had his binder, and he certainly did refer to it quite a bit. That was his choice. That was his decision,” Horwath said.

The Liberals did not directly address Ford’s use of notes, but Del Duca made reference to the binder in post-debate scrums and in a news release.

The Liberal leader said Ford was "literally reading a script like he took it from a binder from four years ago" when talking about PC policies. Meanwhile, a Liberal news release subtly poked fun at the binder trope by compiling a list of “corrections to the most glaring lies in Doug Ford’s binder.“ 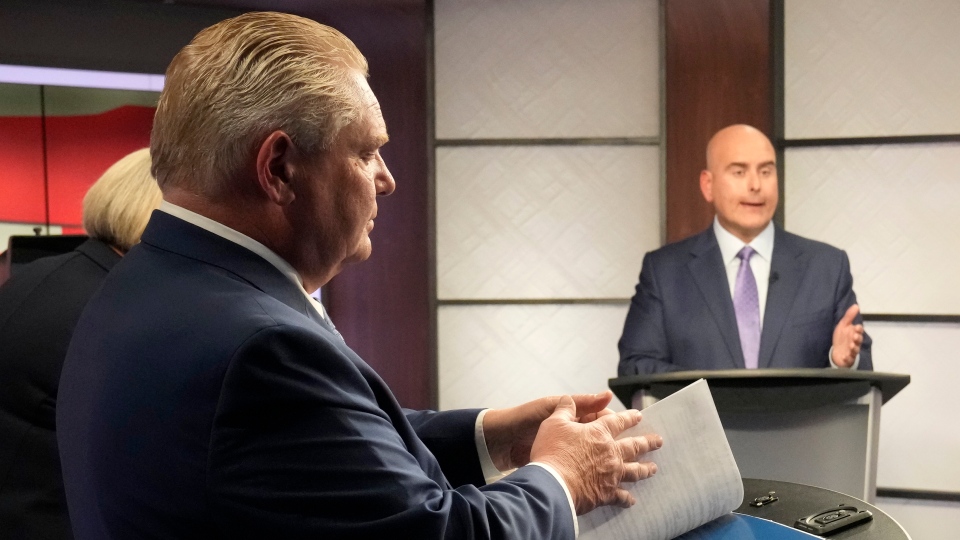 Rather than jab at Ford, Schreiner took a question about the binder in his scrum to dive into his ability to be authentic and speak from the heart. “I tell you exactly how I feel,” Schreiner said.

"It's unfortunate that maybe not every leader feels like they have the freedom to be that straight with folks."

As was expected, the COVID-19 pandemic was top of mind for party leaders as they discussed issues such as the economy, healthcare and education.

Following a question about what the party leaders learned from the pandemic, Ford admitted it was "the most challenging time" of his term as premier and that his government did not get everything right.

"I'll tell you every decision I made was with the best intention with the best medical advice I could get at the time. But we're gonna fix the system. We're fixing it right now," he said while promising it would "never happen again."

At the same time, Ford reacted defensively when his three opponents criticized those very decisions, saying it's easy to comment from the sidelines.

Del Duca, for his part, argued that Ford’s argument that he worked “24/7”during the pandemic was void because “this was the job you signed up for.”

In a post-debate scrum, the Liberal leader said he was disappointed that Ford vied for pity when talking about the last two years.

“You don’t just get to be premier when there are parades and sunshine,” he said.

Ford blamed the Liberals for leaving hospitals without enough personal protective equipment while Horwath argued that healthcare deteriorated under the 15-year Liberal reign, but that Ford’s cuts destroyed the system.

Ford took advantage of as many opportunities as he could to point out that multiple unions have thrown their support to the Progressive Conservative Party.

The NDP has typically been known as a pro-worker party and has supported labour movements in the past.

Ford said the endorsements by some labour leaders shows the NDP has “lost touch.”

“You're out of touch with the hard working men and women that are supporting us for the first time,” Ford said while Horwath quipped back by saying, “I think you need to look in the mirror.”

The PCs have received the support of the International Brotherhood of Boilermakers as well as unions representing construction and electric workers.

When asked what it means that unions are supporting Ford as premier, Horwath answered by saying reporters will have to ask those union leaders.

“I certainly do know that the commitments to working people will never end for me.”

At the end of the debate, Del Duca addressed Horwath’s digs against him and his party, saying that every time the NDP attacks him, “Doug Ford smiles.”

Horwath has often spoken about how the Liberals had 15 years to “fix things” and they didn’t. Throughout the 90-minute debate, she stuck with this technique, pivoting between criticizing Ford’s actions over the last four years and commenting on how the system was broken to begin with.

Speaking after the debate, Del Duca reiterated this statement–saying the NDP’s first round of ads last year targeted him rather than the party in power. While he says he isn’t concerned about vote splitting, he says he is disappointed considering the many policies the two parties have in common.

“It’s disappointing that Horwath has spent a lot of time, maybe an equal amount, maybe even more time attacking Ontario Liberals instead of taking the fight where it belongs.”

Horwath, for her part, didn’t seem concerned about splitting votes. She told reporters that Del Duca “is just not ready” to be premier, adding that his party doesn’t have candidates in every riding.

“We’re your best shot at getting rid of Doug Ford.”

A clear divide drawn in the early days of the campaign was further emboldened when Highway 413 emerged within the first few minutes of the debate.

The NDP, Liberals and Greens instilled their opposition for the roadway while Ford touted its glory in his opening statement.

Del Duca’s disapproval came in the form of a personal response on the six-lane highway, which would run east from Halton to York Region through his riding of Vaughan.

“I'm the only person on this stage tonight whose community is directly impacted because of this proposed highway,” Del Duca said. “'I’m also the person who several years ago, when I was serving as Minister of Transportation at that time, I saw that this was a mistake, a colossal mistake, that you don't need.”

Meanwhile, Schreiner and Horwath separately honed in on the extensive environmental impact of the highway. “It's a climate disaster,” Schreiner said.

“It paves over farmland, it paves over the Greenbelt,” Horwath said, “What we don't need is more massive highways to mansions that nobody can afford.”

Ford applauded one party leader during the debate.

“What I like, at least Mr. Schreiner is honest and upfront,” Ford said.

When the topic of addressing rising levels of hate crimes and political divisiveness was presented, Ford complemented Schreiner’s transparency while claiming the NDP and Liberals are not upfront when it comes to raising taxes.

"I can work with Mr. Schreiner": Progressive Conservative Leader Doug Ford praised Green Leader Mike Schreiner's ability to work with him while criticizing the other two party leaders on their ability to work collaboratively. #onpoli

“He says he's for higher taxes. He's for more regulations. And I just wish you would rub off on your other two colleagues,” Ford said about the Green Party leader.

“We work together, Mike, and you're the type of guy, you can put the political stripes behind you.”

Before Schreiner could respond, moderators interjected to announce time was up and they moved onto a new category.