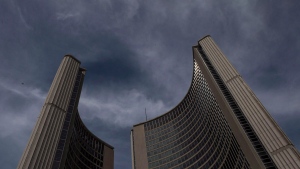 The City of Toronto has begun pausing work on dozens of planned capital projects as it continues to lobby the federal and provincial governments for hundreds of millions of dollars in funding to offset financial impacts related to the COVID-19 pandemic.

The 2022 budget approved by city council in February was balanced on the basis of $1.4 billion in assumed funding from other levels of government, repeating a budgetary trick that the city also utilized in 2021.

In a report that will go before Mayor John Tory’s executive committee next week, staff estimate that about $525 million in COVID-19 support funding has been secured since the budget was passed this winter, reducing the total shortfall to about $875 million.

However, with no concreate assurances that more money is forthcoming staff say that they have now begun to pause about $300 million worth of capital projects that were slated to be completed in 2022.

“All of this shortfall we are experiencing is entirely related to COVID, it is not because we spent too much money or any other failure on our part,” Mayor John Tory told reporters during an unrelated press conference on Tuesday morning. “It it entirely related to COVID and the fact that our systems in our city – our transit system our shelter system – are at a scale way in excess of any other city in Canada. So as a result when we have to shelter more people or we have to take account of more riders that weren’t riding transit and still aren’t to some extent during the pandemic, we are going to experience bigger losses in revenue than any other city by far in Canada.”

Tory told reporters that he remains optimistic that the federal and provincial governments will come to the table and provide enough funding to help offset the lost revenue and increased costs the city has had to shoulder due to the COVID pandemic.

But he said that pausing capital projects is “the prudent thing to do” in the interim.

The list prepared by city staff outlines dozens of projects which will now be on hold, including millions of dollars worth of road rehabilitation work. The construction of a berm to assist with flood protection efforts on Algonquin Island is also included on the list.

“I would think what they (residents) are likely to see is a particular small improvement in a park might not happen but they might not have even been aware of the fact it was going to happen. It is that kind of thing. It is at the moment smaller projects spread across transportation, parks and other departments and I think most people wouldn’t notice that they are not being done right now,” Tory said. “But I noticed these things because of course if you aren’t doing them in 2022 they get added to 2023 and the list gets longer. So the objective here will be to move ahead with all of these if we possibly can.”

Tory was scheduled to meet with Prime Minister Justin Trudeau on Tuesday afternoon and told reporters that the need for additional funding to offset COVID-19 financial impacts would be at “the top of the agenda.”