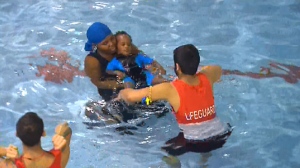 The City of Toronto is cancelling five per cent of its fall recreation programming due to an “ongoing nationwide labour shortage."

The cancellations amount to 540 courses of the roughly 10,000 that were planned to take place this fall session, which runs from October 1 to early December. Impacted programs include learn to swim and learn to skate classes, fitness classes, and sports programming.

Today, city staff started contacting the 3,800 or so affected registrants, who will receive a full refund or be offered spaces in alternative programs where possible.In a release, the city said it “prioritized the recruitment and training of lifeguards, swim instructors and other instructional staff,” but was ultimately unable to retain enough qualified staff to offer its full roster of recreational programming this fall.

Howie Dayton, the City of Toronto’s director of community recreation, said among other things the staffing issues stem from the inability during the pandemic to offer certification programs for specialized rec workers.

He also said a lot of the workforce, most of which is comprised of part-time workers, has moved on from the role they held back in 2019 to pursue other opportunities.

“We're ramping up as quickly as we can to offer those leadership and certification opportunities and outreach and recruit, but we hire 1000s of people and it takes time to ramp fully back up,” Dayton said, adding there is usually a “pipeline of young people” moving through the city’s various leadership streams who are able to take those vacancies when they occur, but after two years of suspending operations, they “just haven't been able to secure a sufficient enough pipeline of qualified certified instructors in these types of positions.”

He said the focus now is to “get people interested in those courses and schedule as many as (they) can.”

“We've made progress. We have 30 per cent more of a service level than we did in the spring of 2022 and in the summer, because those efforts are paying off, but I recognize it's disappointing for those that are impacted this fall,” said Dayton.

The city said it is “continuing to prioritize recruitment for recreation positions, including aquatics staff and ice skating instructors," however it is unclear how long it will take to fully address the staffing shortages.

Between 3,200 and 3,500 staff are required to deliver the roughly 10,000 programs that are part of the city’s fall schedule. There are approximately 81,000 participants currently registered for 2022 fall programming.

The city also faced some recreational staffing issues this summer, but in the end, enough staff members, including lifeguards, were in place to supervise Toronto’s outdoor and indoor pools and swimming beaches. Wages for aquatics positions were reviewed earlier this year, which resulted in a 17 per cent increase on average.

“The city will continue its recruitment efforts this fall as it prepares for winter programming to begin in January,” officials said in the news release.