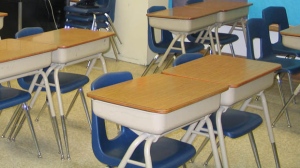 Students at Toronto’s public elementary schools will be receiving their grades after all.

In a release issued Tuesday night, the Toronto District School Board said that marks for students in Grades 1 to 8 – as well as information on attendance and grade placement for the upcoming school year – will be mailed out the week of July 13.

Parents of kindergarten students will receive placement letters for the upcoming year mailed out during the same period.

The news follows the announcement by the board last Thursday that students would be getting placement letters instead of report cards.

“Due to recent developments with regards to the strike action, previously-announced plans to provide a placement letter for all elementary students and verbal updates by June 26 cannot be accomplished fairly and equitably across the TDSB due to the differing sizes of schools,” Tuesday’s release said.

Teams comprised of senior staff and business and operational staff will be used to help distribute grades, the board said.

“We know that it’s very important to students and parents to have access to their marks, so when it became clear that some might not receive marks for a number of months, we began looking at alternate options,” Donna Quan, director with the TDSB, said in the release.

“By using central staff to assist and providing marks via mail, we are ensuring that all - not some - parents and students have access to marks in an equitable and timely manner.”

Speaking with CP24 Tuesday, the president of the Elementary Teachers of Toronto said he was pleased with the announcement.

“The TDSB is finally honouring the work that teachers have done to prepare, to assess and evaluate, and prepare the marks for students at the end of the year,” John Smith said.

“They’re doing what many of the other boards around the province already said they were going to do.”

Last week, the York and Peel district school boards announced they would also be sending out placement letters.