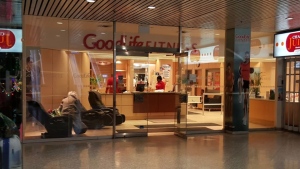 A GoodLife Fitness club inside a mall in midtown Toronto is pictured. (Google)

A group of trainers at the country’s largest chain of fitness clubs has voted to unionize.

More than 600 personal trainers working at Toronto GoodLife Fitness locations voted to be represented by the Workers United Canada Council, according to a release by the organization.

The votes were counted yesterday by the Ontario Labour Relations Board after an application for certification was filed earlier this year by the WUCC.

Group fitness instructors from the GTA, whose work puts them in a different category from trainers, also took part in the vote but opted not to unionize.

According to the union, the trainers have been concerned about a number of workplace issues, including compensation in case of workplace injury, clawbacks in wages, having to pay out of pocket fees for training and equipment and having to sign non-compete clauses that prevent them from working elsewhere as trainers.

In a statement, GoodLife Founder & CEO David Patchell-Evans said he hopes the new union “will share our vision of prioritizing a culture of caring, integrity and open communication.”

“We are committed to continuing to provide a healthy and supportive work environment, as well as focusing on consistently becoming better with the feedback and input of our employees,” Patchell-Evans said.

“The most important thing for us is to continue to have a positive and collaborative relationship with all of our employees,” Riddell said in the release. “This is new territory for us, but we are confident that we will be able to work together with our employees to create a healthy and successful future for all.”

The move affects 42 clubs in Toronto.