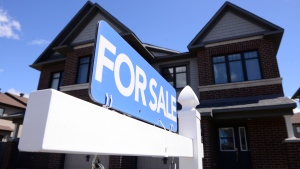 The average selling price of a Toronto home decreased by roughly $10,000 last month as the increased cost of borrowing continued to weigh on the city’s real estate market.

The latest data from the Toronto Region Real Estate Board (TRREB) shows that the average resale price across all property types was $1,079, 398 in November, compared to $1,089,428 in October.

Home prices in Toronto have now fallen by an average of 5.5 per cent compared to November 2021, however TRREB points out that the declines have been more pronounced in the “more expensive market segments,” such as detached (11.3 per cent) and semi-detached homes (13.9 per cent).

If your fixed-rate mortgage is up for renewal soon, we want to hear from you

The condo market has proven to be more resilient with resale values down only 0.9 per cent on average, compared to this time last year.

In a news release, TREEB President Kevin Crigger said that while increased borrowing costs represent a “a short-term shock to the housing market,” he still anticipates that the demand for housing will “pick up strongly” over the medium and long term, largely due to increased immigration.

“The long-term problem for policymakers will not be inflation and borrowing costs, but rather ensuring we have enough housing to accommodate population growth,” he said.

The Bank of Canada has now increased its key lending rate six consecutive times, lifting it from a historic low to its highest point since 2008.

That, in turn, has put pressure on Toronto’s real estate market with at least one major bank suggesting that a ‘historic correction’ is now afoot.

The latest data from TRREB does show that new listings were down 11.6 per cent from November, 2021, providing some support to prices.

However, sales were down a staggering 49.4 per cent from November 2021.

That is after a similar 49 per cent decrease in transactions in October.

In its release, TRREB said that the market is continuing to be “influenced by the impact of higher borrowing costs on affordability.”

But it said that prices have essentially “flatlined” since the summer.

“Selling prices declined from the early year peak as market conditions became more balanced and homebuyers have sought to mitigate the impact of higher borrowing costs. With that being said, the marked downward price trend experienced in the spring has come to an end,” TRREB Chief Market Analyst Jason Mercer said.

TRREB says that the average selling price for a detached home fell to $1,390,162 in November while condominium units changed hands for an average price of $708,636.

A report released by Re/Max last week suggested that average residential sale prices are expected to drop another 11.8 per cent in the GTA in 2023.