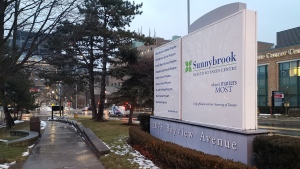 Sunnybrook Hospital is shown in Toronto on Sunday Jan. 26, 2020. A man in his 50s who travelled to Toronto from China earlier this week has become the first Canadian case of the new coronavirus, health officials said Saturday as they urged calm in the face of an international outbreak. THE CANADIAN PRESS/Doug Ives

The husband of a Toronto woman who was diagnosed with COVID-19 on Tuesday night has also tested positive, representing Ontario's first confirmed instance of local human-to-human transmission of the virus.

On Wednesday, public health officials said a Toronto woman in her 60s who returned from Iran on Feb. 15 tested positive for the novel coronavirus, prompting public health officials to put her husband and her son into home self-isolation and embark on a mission to reach out to anyone she had come into contact with over a nine-day span.

On Thursday, public health officials said her husband, who did not travel to Iran with his wife, tested positive for the virus.

Toronto Medical Officer of Health Dr. Eileen de Villa said that after working into the “wee hours” of the night, the contact history tracing of both the husband and wife is complete.

“We’ve identified all of those contacts who warrant any other health follow-up.”

She would not say how many people were contacted or where they were located, but implied that many of them are being tested for the virus.

The couple's COVID-19 diagnoses represented a particular challenge for public health workers, as the wife spent nine whole days in the city before falling ill, donning a mask, and going to Sunnybrook Hospital's ER to report her symptoms.

Multiple national public health agencies have reported the novel coronavirus' ability to transmit asymptomatically, and incubate in a host for up to 14 days before showing symptoms.

Officials told CTV News Toronto the couple's son, who does not live in their home, is in his own home under self-isolation and doctors are awaiting results of his test.

The husband, who is also in his 60s, is Ontario's third active coronavirus case and Canada's thirteenth overall.

De Villa stressed Canada is not experiencing any local transmission of the virus outside of close contacts of people who travelled to an impacted area abroad.

“At this stage of the game there is not local transmission of COVID-19.”

Three other Ontarians, a Toronto couple in their 50s and a London, Ont. university student in her 20s, all with travel histories to China's Hubei province, have made full recoveries from the disease, which has sickened more than 80,000 people around the world.

Another Toronto woman, also in her 20s, is currently in self-isolation at home recovering from the illness, after recently returning from travel throughout multiple regions of China.

Returning travellers from Iran now represent the origin of four of Canada's last five COVID-19 diagnoses, prompting federal officials to add Iran and five other countries to its travel advisory, asking anyone returning from those countries to self-monitor for symptoms and report to a local public health unit if they fall ill.

Ontario officials say they are currently discussing whether to expand COVID-19 testing to anyone who reports to a hospital emergency room with flu-like symptoms, or people requiring treatment for more complicated respiratory symptoms.

View a complete timeline of virus cases in Canada below:

Sunnybrook Hospital is shown in Toronto on Sunday Jan. 26, 2020. A man in his 50s who travelled to Toronto from China earlier this week has become the first Canadian case of the new coronavirus, health officials said Saturday as they urged calm in the face of an international outbreak. THE CANADIAN PRESS/Doug Ives