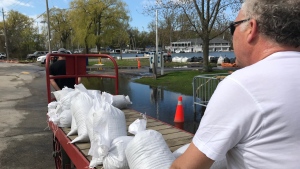 Residents are shown moving sandbags on the Toronto Islands on May 24. (Sean Leathong)

Parts of the Toronto Islands face a “substantial risk” of flooding with Lake Ontario water levels now precariously close to the high point that was seen back in 2017, officials say.

The water level in Lake Ontario currently stands at 75.85 metres, which is just eight centimetres short of the highest daily level that was recorded during the major flooding event that shut down the islands for months back in April, 2017.

So far flooding damage has been minimal but there was significant ponding reported on some parts of the islands on Thursday night as large waves whipped up by heavy winds breached sandbags on the north side of Ward’s Island and berms that had been set up on the south side of Algonquin Island.

Speaking with reporters at a news conference on Friday, Waterfront Parks Manager James Dann said that staff are working 24 hours a day to protect the islands.

He said that 24 industrial pumps are also running 24/7 with the largest of those pumps capable of removing 500,000 litres of water per hour.

“The ground is saturated where we are standing and there is a substantial risk of having more ponding but the pumps will continue to run and they will continue to do an effective job of keeping the island dry,” he said. “We are confident we will be able to keep the islands open for the entire summer. If we can get through a storm like we got last night we can get through an awful lot of things.”

Olympic Island under 12 inches of water

Dann said that right now there about a dozen homes on Algonquin Island with water in their front yards and a number of other properties on Ward’s Island where basement crawl spaces have been flooded.

He said that Olympic Island, which does not have any residences, is currently under about 12 inches of water and is likely to be off-limits for the foreseeable future.

The rest of the islands, however, remain open and Dann said that a wedding scheduled for tomorrow will go ahead.

“We do not mess with brides to be, so events will be taking place,” he quipped. “Right now on the main road there are sections where we have had to limit vehicular traffic but for the tourists, for the locals and for the residents it will remain open.”

Waters will continue to rise

Lake Ontario will continue to rise for the next seven to 10 days and it will then be several weeks after that until the water recedes to a normal level, according to the Toronto Region Conservation Authority.

In the meantime, many island residents are on edge.

Tony Fairbrother, who is co-chair of the Toronto Island Community Association, said that up to 100 residents volunteered to put up sandbags on Thursday but couldn’t keep up with the waves.

“It was pretty well an emergency. People were panicking last night, I was crying, water was pouring over the walls and the waves were so strong that they were pushing the bags away from us,” he said. “The water was above my boots over on Seneca (Avenue). It was really scary for a lot of people.”

Fairbrother, who has lived on the islands for 24 years, said that residents “tried not to believe that there would be a repeat” of the catastrophic flooding in 2017 but are now realizing that it is going to happen again and again.

He said that while the pumps installed after the flooding event in 2017 have been effective in removing ponded water, they are little match for water coming over the berns that are supposed to protect the shoreline.

The city has said that crews will be re-sandbagging areas that were breached over the next 72 hours and are also relocating pumps near the areas where flooding has occurred.

Approximately 50,000 sand bags are already on the islands.

After touring the island on Friday afternoon, Mayor John Tory told reporters that city staff will need to discuss what further steps should be taken to protect the island.

"You hope not but when you see it happen twice in three years when previously it hadn’t happened for 40 years, then that is often enough to tell you something is definitely changing and not for the better."

In the meantime, Tory said staff see no reason why the island should be closed to the public.

"It is very important for people to know that the island is open," the mayor said.