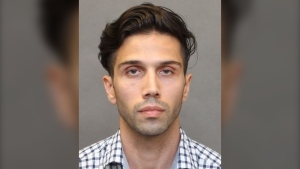 Arash Mahdieh, 38, is seen in this photo. (Toronto Police Service)

Police allege a 38-year-old Toronto man, claiming to be an investor, defrauded a woman of $59,000.

Back in February 2015, a man met a woman and told her he was an investor named “Ari Archer,” investigators said.

The woman gave the man the large sum of money to invest at an unknown time. A short time later, police said, the woman “began to question his legitimacy and confronted the man asking for her money back.”

According to investigators, the man then “continued his ruse,” claiming the thousands of dollars were “tied up in the investment.”

The Toronto Police Service became involved in the matter in September 2019.

On Sept. 10, 2019, a suspect, identified by officers as Arash Mahdieh, was arrested in connection with the investigation.

While publicly identifying the suspect and releasing his image to the public on Monday, police added that they are concerned there may be additional victims.