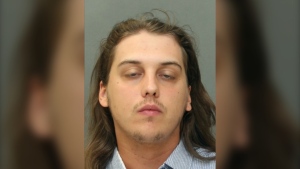 Mitchell Avery Martins, 24, seen in this photo, has been charged in a sexual assault and extortion investigation. (Toronto Police Service)

Toronto police have charged a 24-year-old man after allegedly extorting two women and sexually assaulting one of them.

One of the incidents happened in April near Woodbine Avenue and Lake Shore Boulevard East, where a woman met up with a man she first encountered online.

Police said she entered his vehicle and was allegedly sexually assaulted. The woman was then allegedly extorted by the man.

Investigators later learned about another incident that occurred in 2020 in the area of Allen Road and Eglinton Avenue West.

Police said another woman met a man online and sent photos to him. The man allegedly extorted the woman.

On Thursday, police arrested Toronto resident Mitchell Avery Martins. He has been charged with two counts of extortion, sexual assault, sexual assault with choking, publishing an intimate image without consent, assault and failing to comply with a release order.

He was remanded into custody and will appear in court on Friday.

Police have released an image of Martins as they believe there may be more victims.