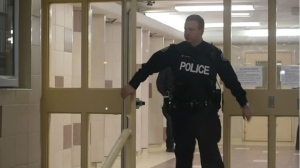 A Toronto police officer on the scene of a stabbing at 200 Wellesley Street East on Friday, Nov. 13. (CP24)

A 25-year-old Toronto man has been charged with second-degree murder after a 55-year-old man was stabbed inside a Toronto Community Housing building east of downtown and later died in hospital.

On Friday at about 3:31 a.m., Toronto police say they responded to an unknown trouble call at 200 Wellesley Street East, an apartment tower owned by Toronto Community Housing.

They say a man was found at the scene suffering from “obvious signs of injury.”

The man, identified as 55-year-old Tony Millett, was taken to a local hospital where he later succumbed to his wounds.

A post-mortem exam on Sunday found that Millett died of stab wounds.

On Friday, David Hargrave was arrested and charged with second-degree murder. He appeared in court at Old City Hall on Saturday.

Anyone who was in contact with Hargrave prior to the alleged incident is asked to call homicide investigators at 416-808-7400.