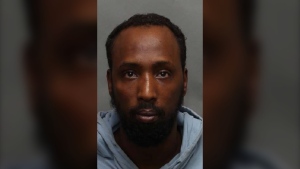 The Toronto Police Service (TPS) is looking to locate a man wanted in connection with an assault that took place in the city’s northwest end.

On July 14, TPS responded to a call in the Weston Road and Coulter Avenue area.

It is alleged that a man refused to let two women leave a residence and assaulted the two women repeatedly.

Police say one woman was able to flee the residence and call for help.

TPS has identified Toronto resident Liban Mohamud, 39, as a suspect in their investigation.