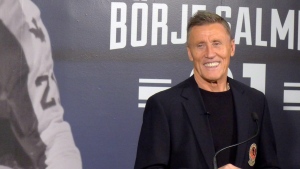 Toronto Maple Leafs legend Börje Salming has died after a battle with amyotrophic lateral sclerosis (ALS.) He was 71.

The team released a statement on Thursday announcing the death on behalf of the Salming family, saying he was a "pioneer of the game and an icon with an unbreakable spirit and unquestioned toughness."

“He helped open the door for Europeans in the NHL and defined himself through his play on the ice and through his contributions to the community,” Maple Leafs President Brendan Shanahan wrote.

“Börje joined the Maple Leafs 50 years ago and will forever be part of our hockey family. We extend our deepest condolences to his wife, Pia, his children Theresa, Anders, Rasmus, Bianca, Lisa and Sara and brother Stieg.”

Salming announced in August he has been diagnosed with ALS.

"I have received news that has shaken my family and me,” he said at the time "The signs that indicated that something was wrong in my body turned out to be the disease ALS, also known as Lou Gehrig's disease."

Salming, who played 16 seasons with the Toronto Maple Leafs from 1973 to 1989 and was inducted into the Hockey Hall of Fame in 1996, said he recognizes there is currently no cure for ALS, but would ”remain positive.”

"In an instant, everything changed. I do not know how the days ahead will be, but I understand that there will be challenges greater than anything I have ever faced."

The @MapleLeafs had a very special ceremony to honor Börje Salming tonight. ❤️

The Swedish legend who still stands as the highest scoring defenseman in Leafs history is currently going through a battle with ALS, but 'came home' to Toronto for the weekend. pic.twitter.com/eTjqDH0O2O

ALS is a progressive nervous system disease that leads to paralysis, the inability to swallow, respiratory failure and finally death.

Earlier this month, the former Leafs defenceman was honoured by the franchise in an emotional moment with former players Darryl Sittler and Mats Sundin.

Mayor John Tory expressed his condolences to Salming's family, loved ones, and to Toronto hockey fans following the news of his passing.

"From Sweden to Toronto, 'The King' will be remembered for the incredible impact he had on our city," Tory said in a statement Thursday. "I'm thankful he was able to be here earlier this month for such a courageous and loving moment on the ice."

Salming’s #21 jersey hangs in the rafters at Scotiabank Arena. His number is only one of 19 others the Leafs have retired.

Outside of the Leafs, Salming played for Sweden at four IIHF World Championships, three Canada Cups, and the 1992 Winter Olympics.