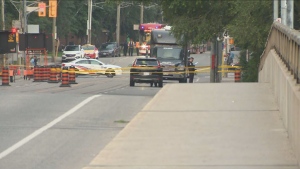 A man has died after suffering traumatic injuries in Regent Park early this morning.

Investigators say 51-year-old Toronto resident Yan Qing Sun was involved in an altercation with another man in the area of Gerrard and River streets at around 2:30 a.m. on July 28.

Police say during the fight, Sun was stabbed and suffered traumatic injuries as a result.

He was rushed to hospital for treatment but later died.

One man was arrested at the scene and police later confirmed that 34-year-old Shalender Singh was charged in connection with the homicide.

Singh faces one count of first-degree murder in the deadly attack.

Police are asking anyone with information about the victim’s movements just before the homicide to contact investigators.