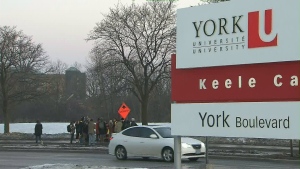 Toronto police say they are reviewing the circumstances around a violent anti-Israel protest at York University to determine if there is any evidence of hate crimes.

“We are closely reviewing the protest that took place and turned violent at York University this week,” Chief Mark Saunders said in a tweet Friday. “If we find evidence of hate crime, the @TorontoPolice will seek to lay criminal charges against those responsible.”

The protest took place Wednesday night at Vari Hall, where an event was being held by the Herut Zionism Club. The event featured Israel Defence Force reservists talking about the Arab-Israeli conflict.

Large numbers of protesters, including non-university groups, showed up to the venue, chanting loudly and threatening physical confrontations.

Other videos showed people fighting inside the building before the clashes were broken up by police.

“The tension was high at times and the groups were in close proximity to one another, resulting in some verbal and physical confrontations,” York University President Rhonda Lenton said in a statement Thursday.

Some of those who attended the event had to be escorted out by security due to safety concerns.

The rowdy protest drew swift condemnation from the university and from a number of politicians.

“I want to emphasize in the strongest possible terms that acts of violence are not tolerated on our campuses and York University has zero tolerance for hate,” Lenton said in her statement.

She also said that “shouting, threats of violence and attempts to intimidate community members are not consistent with the responsibilities we all share.”

One person was injured in the clashes, but not seriously.

No arrests were made.

One of the organizers of the protest, a group called Students Against Israeli Apartheid, told The Canadian Press that their demonstration was peaceful and that their chants targeted the IDF rather than the larger Jewish community.