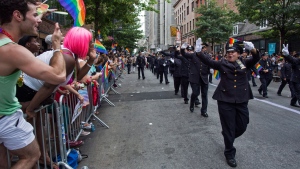 Toronto police have received an invitation to participate in uniform at New York City’s Pride March amid a controversy over the exclusion of uniformed officers from Toronto’s Pride Parade.

In a  letter sent to Toronto police on Friday, the Gay Officers Action League requested permission for uniformed TPS officers to join uniformed members of the NYPD Marching band and color guard in the June 25 Pride March in New York City.

The New York City event is the same day as Toronto’s own Pride Parade.

“If Toronto officers would like to march proudly as open LGBTQ criminal justice professionals in a march and they feel it’s important to identify both as an officer and a member of the community – we welcome them with open arms,” Gay Officers Action League President Det. Brian Downey told CP24 in an interview Monday.

The controversy over police participation in the Pride Parade began at last year’s parade, when Black Lives Matter –Toronto halted the parade and refused to budge until a list of demands was signed – one of them being the exclusion of uniformed officers from the parade.

The group argues that some marginalized communities, particularly black and transgendered people, have a hostile relationship with law enforcement and do not feel safe around police officers, making their participation in the event problematic.

Then Pride director Mathieu Chantelois signed the list to get the parade moving, but later recanted and said the organization was not bound by the demands.

However in January a surprise motion to adopt the demands at Pride’s annual general meeting was approved by a majority of those in attendance and the organization has moved to implement the changes.

Earlier this year Toronto Police Chief Mark Saunders said that uniformed officers would not participate in this year’s parade as Pride Toronto seeks to sort through the issue of police inclusion among its membership.

Pride Toronto’s new executive director, Olivia Nuamah, has characterized the move as a step back for the organization to listen to all voices and create an event that more fully reflects the needs of all members of the community.

She has said that officers are free to take part in the parade as long as they do so without weapons, uniforms or police vehicles.

However the decision has drawn sharp criticism from some corners, including the Toronto Police Association, some members of the LGBT community and some city councilors.

Earlier this month, Coun. John Campbell brought a motion forward for city council to withhold Pride’s $260,000 grant because of police exclusion.  However the idea was rejected by Mayor John Tory and did not find wider support at council.

In an email Monday, a spokesperson for Pride Toronto said the group had no comment on the invitation from the Gay Officers Action League.