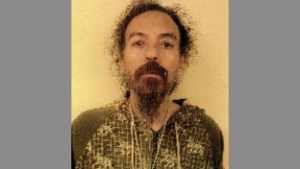 Daniel Kent, 47, is pictured in this handout image. (Toronto police)

Toronto police are trying to find a man with a violent past who wandered away from a downtown psychiatric facility.

Kent was found not criminally responsible for a count of aggravated assault in 2001.

He is described as standing six-foot-one and weighing 170 pounds. He has light brown hair, brown eyes, a beard, and uses two assistive canes. He was wearing a yellow sweater, brown coat, and black leather Adidas running shoes.

Police are asking anyone who spots Kent to call 9-1-1 immediately rather than approach him.