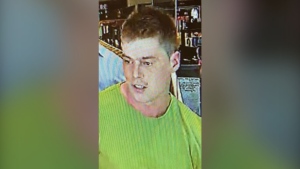 Police are looking for the man seen in the photo in connection with assaults inside a Toronto store. (Toronto Police Service)

Toronto police have released a surveillance video image of a suspect who allegedly assaulted three people in an east end store on Monday.

Police said they were called three times to an establishment in the area of Queen Street East and Bellefair Avenue, east of Woodbine Avenue, between 1:30 p.m. and 1:45 p.m.

During that time, a man walked into a store and was involved in three separate altercations with several customers, police said.

Police said those who were assaulted included a 22-year-old woman, a 46-year-old man and a 48-year-old man.

On Tuesday, police released details about the suspect, who they say is considered violent and dangerous.

He is described as between the ages of 25 and 30 with a short stature, dirty blond hair with the sides shaven, and a small moustache.