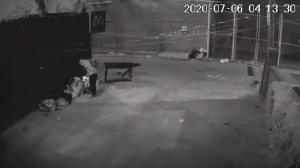 Toronto police are asking for the public’s help in identifying a suspect in an arson investigation in the city’s West Queen West neighbourhood.

On Sunday, July 5, at 5 a.m., officers were called to the area of Queen Street West and Shaw Street for reports of an arson.

It’s reported that a man started a fire in a rear alleyway and fled the area.

Police have released security video from the scene.

The man is described as wearing dark coloured pants, a light coloured hooded sweater, and carrying a dark coloured backpack with reflective material.