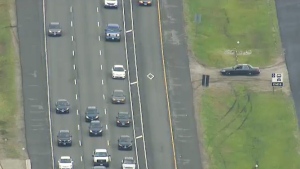 There was a noticeable uptick in collisions on Toronto-area highways as police officially began enforcing the rules governing the use of a series of new HOV lanes for the Pan American Games on Monday morning.

According to Det. Sgt. Devin Kealy, there were 12 collisions reported between 6 a.m. and 9 a.m. yesterday compared to zero during the same time period the previous week.

The increase in collisions came as police began enforcing rules that limit the use of the new HOV lanes to accredited games vehicles, public transit vehicles, taxis, emergency vehicles and vehicles with three or more people.

“Without doing a complete audit it is difficult to say what the true cause is however they do correlate with the opening of the HOV lanes,” Kealy said of the collisions. “This is right in line with other cities have experienced, though. In both London and Vancouver when they first had their game route networks start up they experienced some difficulties as well and some challenges for the first few days. As with any change there is always an adjustment period to become accustomed to the travel conditions. It’s very similar to what we see when we get the first snowfall of the season.”

The HOV lanes run along the Queen Elizabeth Way, the Gardiner Expressway, Lake Shore Boulevard, Jane Street south of Highway 407 and highways 401, 427 and 404 and will be in effect from 5 a.m. until 11 p.m. throughout the Pan Am and Parapan Am Games.

Speaking with reporters on Tuesday morning, Kealy admitted that “traffic was very congested” as enforcement on the new lanes began on Monday but he said that it is his hope that drivers soon adjust their habits and either carpool or avoid the roads during morning and evening rush hours.

“It is obvious there was a lot of frustration yesterday out on the roads. I had my own wife give me a call because she was caught out there in that traffic. However I think it is important we keep perspective on everything,” he said. “Yesterday was the first day dealing with this and we had to deal with heavier traffic than normal but we got through it and there were no fatalities.”

According to Kealy, there was only one collision reported on Toronto highways between 6 a.m. and 9 a.m. today, suggesting that residents are “already adjusting.”

The penalty for improperly using the lanes is $85 on Toronto police-patrolled routes and $110 and three demerit points on routes patrolled by Ontario Provincial Police.