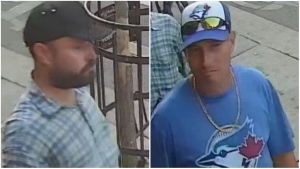 Two suspects wanted in connection with an assault with a weapon investigation are seen in this image. (Toronto Police Service)

Images of two suspects wanted in connection with an incident that saw a victim allegedly hit over the head with a bottle this past summer have been released by police.

Officers were called to the area of Dufferin and Bloor streets at 8:30 p.m. on July 9 for a report of an assault with a weapon.

At that time, police said, the victim was walking in the area when they started a conversation with the suspects.

One of the suspects then hit the victim in the head with a bottle, police said. The two suspects fled the scene before officers arrived.

The extent of the victim’s injuries was not disclosed.

In a news release issued Sunday, police shared surveillance images of both suspects. 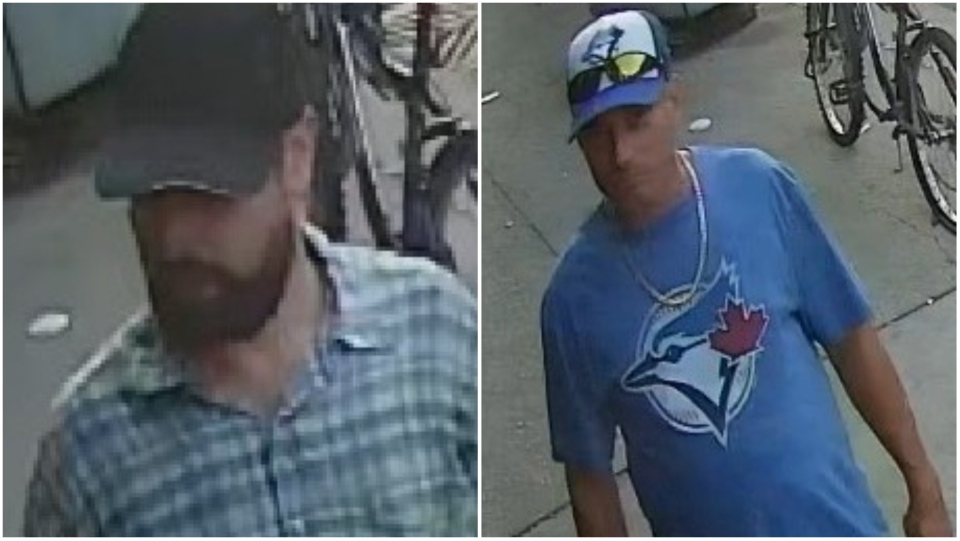 The first is described as having a medium build with a beard. He was wearing a black baseball cap, a plaid button-up shirt, blue jeans, with black shoes and white soles at the time of the incident.

The second suspect is described by police as having a medium build and clean shaven. He was wearing a Toronto Blue Jays shirt, a Blue Jays hat, black shorts, and black shoes with white soles.

Police are asking anyone with information related to the alleged assault to contact them at 416-808-1400 or Crime Stoppers.