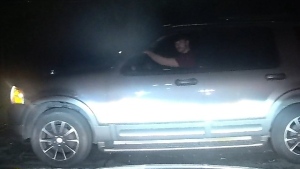 An image of a male suspect wanted in a criminal harassment investigation in Toronto's east end.

Toronto police have released security camera footage of a man who allegedly followed a woman home and then stared at her as she parked her car.

The incident, which police say is being investigated as a case of criminal harassment, happened on Sunday at around 11:30 p.m. near Danforth and Jones avenues.

“The woman fearing for her safety, locked herself in,” Toronto police said in a news release.

The man then fled the area in an unknown direction.

He is described as about 25 years old with a medium build, a moustache, brown hair, and blue eyes. He was last seen wearing a red shirt.

The suspect drove a silver or grey SUV, possibly a Ford Explorer with a “very squeaky” suspension, police said.