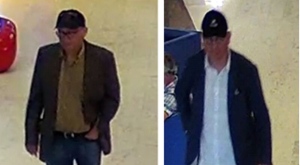 Police are searching for two suspects who allegedly stole thousands of dollars in belongings from tourists. (Toronto Police Service handout)

TORONTO -- Police in Toronto are seeking two men they allege stole thousands of dollars in belongings from tourists last month.

Investigators say the pair took a purse from a hotel dining area on July 19.

They say two days later, the same men went to another hotel and while one distracted a woman, the other stole her purse.

Police say they believe the suspects are targeting tourists who are likely to carry large sums of cash.