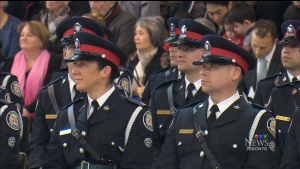 The new officers will be added because attrition in the service “has run slightly ahead of the (Transformational) Task Force’s assumptions.”

Approximately 196 officers have left the service so far in 2017.

But the move, which was agreed upon by Chief Mark Saunders, the Toronto Police Services Board and the Toronto Police Association, will still see the overall size of the police service shrink, as was proscribed in the Transformational Task Force.

The size of the force will fall from 5,224 sworn officers to 4,767 by the end of 2019. Senior police leadership says it will review this decision and weigh it “using evidence and data based support to validate” the number of officers required in 2019.

The new hiring announced Thursday will coincide with a move to promote officers working in acting roles with a rank higher than they actually hold, and provision of overtime to divisions that need it to ensure “acceptable staffing levels.”