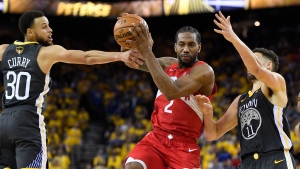 TSN announced Monday that it set a new Canadian record for an NBA game with an average audience of 4.631 million for the Raptors' Game 4 Finals win over the Golden State Warriors on Friday night. The numbers includes viewers on TSN, CTV2 and the French language broadcast on RDS, but does not include people watching the American feed.

TSN also said the Game 4 broadcast was the highest-ranked sports broadcast of the calendar year, surpassing the Super Bowl.

TSN, CTV2 and RDS combined for an average audience of 4.3 million in Game 2 of the Finals on June 2.

Sportsnet reported it had a then-record audience of 3.3 million viewers for Game 1 of the Finals, but that number does not include a French language broadcast.

Sportsnet and TSN, whose parent companies are co-majority owners of Maple Leaf Sports and Entertainment (which owns the Raptors), split the NBA team's broadcast schedule.