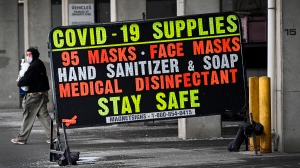 Toronto’ top doctor is asking the province to place the city in the grey lockdown category of its framework for COVID-19 restrictions as of Monday, allowing non-essential retail stores to reopen while keeping most other businesses closed.

Medical Officer of Health Dr. Eileen de Villa shared her recommendation during a briefing at city hall on Wednesday, calling it a “modest step towards more flexibility in daily life.”

If approved by the provincial government the designation would allow non-essential retail stores to reopen across the city, including those located in shopping malls.

“Based on the data in front of us it is clear that reopening widely such as under the red category of the provincial framework is not advisable at this time given our case counts,” de Villa said, noting that the number of samples that have screened positive for a variant of concern in Toronto have doubled over the last week. “Moving out of the stay-at home order is a reasonable course of action for Toronto although I will add that while there are evident reasons for a change in status there remains reasons or risks that underscore how moving back into grey status is, or will be, a delicate balance.”

The province lifted its state of emergency order last month and began gradually moving regions back into its framework, with the exception of Toronto, Peel and North Bay which have remained under an extended stay-at-home order.

As part of Toronto’s potential move back into the grey zone, de Villa has issued a Section 22 order that will establish a series of additional requirements for workplaces with active outbreaks, including the mandatory wearing of masks at all times by employees.

De Villa said that she has also asked the Ministry of Labour to conduct a “workplace inspection blitz” in the city.

“Returning to the province’s framework represents a modest step towards more flexibility in daily life which can be taken because we all worked to limit the spread of COVID-19 but it is important that we all act in ways that do not squander these hard earned small steps forward,” she told reporters. “It is a question of preserving what we have gained.”

Wednesday was Toronto’s 100th consecutive day under a lockdown but the recommendation made by de Villa could represent a slight loosening of restrictions for the first time since this summer.

Of course, restaurants and bars will remain takeout-only and other businesses like gyms and hair salons won’t be able to reopen for at least two weeks.

“I am very sympathetic to those who will not be able to reopen going into grey but I think the best way in which we can avoid that further lockdown later on, which I think everybody to a person says would be the worst case scenario, is to take these cautious steps one at a time and to follow public health advice and keep doing what we have been doing in many respects and then the day may not be too far down the road where we can do more,” Mayor John Tory said during Wednesday’s briefing.

De Villa’s announcement on Wednesday afternoon came hours after Peel’s Medical Officer of Health Dr. Lawrence Loh confirmed that he would also be advocating for his region to be placed under the grey lockdown category in the province’s framework.

The recommendation from Loh comes despite a vocal campaign from Mississauga Bonnie Crombie to have the region moved into the red zone, which would have allowed indoor dining to resume at bars and restaurants with capacity limits.

“From five cases just two weeks ago we now have over 100 confirmed case of variants in our community and 600 that have screened positive and these numbers give me pause,” Loh said earlier in the day. “Our hospitals are also seeing admissions related to spread of variants and while ICU occupancy has improved from the peak of the second wave it still remains at levels similar to what e saw in wave one in the spring of 2020. Reopening too quickly risks eliminating the gains we have made and putting lives and wellbeing at risk.”

Peel’s rolling-seven day average of new cases has risen from 194 at the this time last week to 213.

It also has the highest weekly incidence rate of any public health unit when adjusted for population.

Loh said that if conditions were different he would “absolutely recommend loosening measures more quickly,” as he did in July but can’t do so while cases are rising.

Speaking with reporters during a subsequent news conference on Wednesday afternoon, Crombie conceded that she was “extremely disappointed” by the decision but said that she understands the reasoning behind it.

Nonetheless, Crombie said that she wants the data reviewed on a weekly basis so that Peel can be moved to the red zone as soon as possible.

The province has typically said that it will not move regions to a new level in its framework until it has two weeks worth of data.