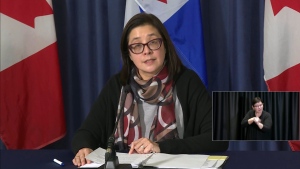 Toronto’s top doctor says that the city is now seeing some “initial indicators” that the level of COVID-19 infection may have plateaued locally but she is warning against lifting public health restrictions “too quickly,” especially with students expected to head back to their classrooms tomorrow.

Medical Officer of Health Dr. Eileen de Villa made the comment during a briefing at Toronto City Hall on Tuesday morning.

She said that while there are signs that the rate of infection in the city may have plateaued other lagging indicators such as hospitalizations, ICU admissions and deaths are still increasing, putting a “significant strain” on the healthcare system.

De Villa also said that she is concerned about any move to increase in-person interaction in the wider community just as students resume in-person learning for the first time in nearly a month.

“Ensuring the success of in-person learning for the rest of the school year relies on seeing solid evidence of an improving COVID-19 situation overall before introducing changes that are likely to lead to more in-person interaction,” she said. “We've learned from our own experiences and from the experiences of other jurisdictions that going too quickly risks the progress we have made and in some cases has forced us to go back to more restrictions. We have seen and felt just how disruptive this is.”

Ontario returned to a modified version of Step 2 of its reopening plan on Jan. 5, resulting in the suspension of in-person dining at bars and restaurants and the outright closure of a number of other businesses, including gyms and theatres.

At the time the government said that the restrictions would be in effect until at least Jan. 26, with any decision about lifting them tied to the status of public health indicators.

However on Monday Chief Medical Officer of Health Dr. Kieran Moore told an Ottawa radio station that he was “starting to have much more hope” about the situation the province is facing.

Then on Tuesday Premier Doug Ford told that same radio station that his government will have “positive news” by the end of the week, hinting at a wider reopening next Wednesday.

Speaking with reporters at city hall, De Villa said that she can appreciate that people are “looking forward to resuming activities that they have missed.”

But she said that “increasing opportunities for people to interact with each other should be done with caution, especially as schools are just reopening.”

“I can compare this to the role of a physician when changing a patient's medication. If there's a change in a person's health and they are currently taking medications doctors will slowly and methodically make adjustments and then evaluate the outcome. This is especially true with patients who are taking several different medications,” she said. “There is a fine balance to maintain with one change being made at a time followed by a period of evaluation. A similar approach can be adopted as we think about our road ahead in the context of Omicron and public health measures.”

Hospitalizations could peak this week

There are currently a record 4,183 patients with COVID-19 in Ontario hospitals, up nearly 30 per cent from last Tuesday.

The rate of increase has slowed, though, and on Tuesday the scientific director of the province’s science table told CP24 that he is hopeful that hospital occupancy could actually peak this week while warning that we shouldn’t “get ahead of ourselves” when it comes to lifting restrictions.

“The first step of the reopening is happening right now. Once we survive the issue with the snow our kids will be back to school and that's the first step and we just need to really then make sure that we don't ahead of ourselves,” he said. “What we need to have now is just a decrease in the in the hospital occupancy numbers so that that our health care system is just able to deal with. It's very challenging right now.”

Juni did not provide any timeline for when it might be appropriate to lift many of the remaining public health restrictions in place in Ontario but he did say that science table can’t even provide the government with new projections to inform its decisions right now because of a previous decision to narrow the eligibility for PCR testing, rendering case counts moot.

He said that many of his colleagues are working on that right now and are using wastewater data to make broader conclusions about the burden of infection but need time.

“We need just a little bit more time. A few days from now we might be able to tell you know the impact of different strategies but right now we should just enjoy the good news, which is that we probably will hit a high plateau for hospital occupancy this week,” he said.