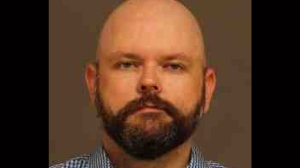 A 45-year-old Toronto teacher has been charged in connection with the alleged sexual assault of a 17-year-old girl.

According to police, between January and June 2020, a man befriended a 17-year-old girl and communicated with her in-person and through telecommunications devices.

Police allege that the man sexually assaulted the girl at some point during that six-month period.

On July 10, a suspect, identified by police as 45-year-old Colin Ramsay, was arrested.

Police say the accused is a teacher with the Toronto District School Board and has taught at George Vanier Secondary School since 2007.

"Considering he is a school teacher, working with the Toronto District School Board, and the allegations are of him and a 17-year-old girl, police are concerned that there may be more victims. So we are reaching out to the public if anyone has any information or is a victim to contact police," Const. Jen Sidhu said at Toronto police headquarters on Tuesday.

"Police are concerned and will be following up on any information regarding any interaction he may have had with children in that area who attend neighbouring schools plus the school he was teaching at."

In a letter to parents, guardians, and students sent out on July 13, staff at George Vanier Secondary School confirmed that Ramsay worked as a communication technology teacher at the school.

The school also said the charges he faces stem from alleged incidents that involved a student.

"Upon learning of the allegations, the employee was immediately placed on home assignment. School administration will continue to cooperate with police in their investigation," the letter read.

"While it is important to remember that laying criminal charges does not constitute guilt, and that a person is innocent until proven otherwise in a court of law, we also cannot and do not take these allegations lightly."

The school went on to say that the safety of students is "a top priority."

"We know that this situation may be upsetting for some students and will ensure that supports are in place for them. TDSB staff are available to help with any questions or concerns students might have," the letter continued.

"Our practice in a situation like this is to share as much information as we can with you. However, please do keep in mind that, because this is a police matter, there is much that we cannot share or do not know."

Ramsay is scheduled to appear in court in Toronto on Sept. 17.