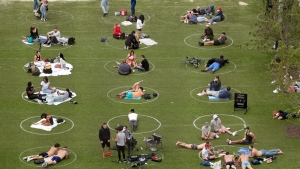 People relax in marked circles for proper social distancing at Domino Park in the Williamsburg neighborhood of Brooklyn during the current coronavirus outbreak, Sunday, May 17, 2020, in New York. (AP Photo/Kathy Willens)

The city will be painting physical distancing circles on the grass at Trinity Bellwoods Park to help enforce public health measures after thousands of people packed the park on Saturday and ignored COVID-19 rules.

Toronto Mayor John Tory made the announcement during a news conference on Wednesday.

“I should tell you that park staff will be in Trinity Bellwoods Park tomorrow painting circles on the grass of that park, which will both help to illustrate proper physical distancing and help with the measurements but also help to ensure compliance in a place where we simply have to do better,” Tory said.

Similar circles have been painted in parks in San Francisco and New York City.

The city said on Monday that it was exploring the use of circles painted on the grass to assist park goers.

On Saturday, as many as 10,000 people were at the downtown park, where many gathered in large groups and drank alcohol as police and bylaw officers looked on.

While people are still allowed to be in parks, current provincial emergency orders prohibit gatherings of more than five people. An emergency bylaw enacted by the City of Toronto also prohibits people who don’t live together from being less than six feet apart in city parks and squares.

Police have so far focused on education when they’ve caught people breaking the rules, but the bylaw allows police and bylaw enforcement officers to hand out tickets of $750. Police handed out several tickets to people who urinated and defecated in the driveways and backyards of nearby homes.

Toronto Fire Chief Matthew Pegg said there will be a strong enforcement presence at Trinity Bellwoods Park and other city parks this weekend.

“This weekend, our enforcement team will be present at Trinity Bellwoods Park to greet park users to remind them about the importance of physical distancing and to take enforcement action as required,” Pegg said.

- with files from Codi Wilson