Toronto won't rule out outdoor haircuts, but some salons say it would be difficult 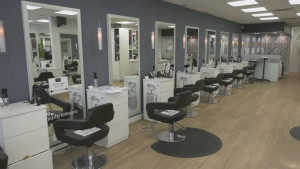 A salon in Toronto is seen in this undated photo.

TORONTO - As Toronto approaches four months of strict pandemic measures that have kept hair salons shuttered, health officials in the city say they aren't ruling out allowing haircuts and other such services to resume outdoors.

Toronto's top doctor, Eileen de Villa, said this week that while the focus so far has been on outdoor dining and fitness, health officials are open to considering other activities that could take place outside.

“We don't preclude discussions on any of the items that that might be outdoors, because we know for a fact that activities that are undertaken outdoors are clearly much lower risk than those that are indoors,” she said.

The city is currently in the “grey-lockdown” zone of Ontario's colour-coded pandemic plan, which allows some retailers to open with limits but only permits restaurants to do takeout and delivery orders.

Local health officials have asked the province to loosen some of the restrictions on outdoor activities.

Some Toronto salon owners, however, said Thursday that though they're eager to get back to work, doing so outdoors poses several logistical challenges.

They noted the lack of outdoor space at many salons, particularly in the city's downtown, as well as the absence of electricity and water, which are required to wash and blow-dry hair.

What's more, they said stylists and their clients would be at the mercy of the weather.

“I'm happy to get to work on anything right now but I don't see that as being a really smooth process unless we have sunny, calm, bright days every day, and they allow salons to spread out on the sidewalk or even onto the (street) parking,” said Tyler Moore, owner of Parlour Salon, which has three locations across the city.

Even then, the number of stylists able to work in that space would be limited, as would the type of services they could offer, Moore said.

“You can't wash their hair because they can't go in to get it washed, so it's just haircuts,” he said.

Sonia Yarkhani, the owner of Evolve Salon, said working outdoors would require a specific setup that would likely not be feasible for most salons.

“If you didn't care about the quality of your work, and the experience of your customers, then yeah, I could just throw a chair on my balcony and I can cut someone's hair. But is it going to turn out good? I don't know,” she said.

Going to the salon is also an intimate experience, and some clients may not enjoy having that moved out in the open, Yarkhani said.

“You're sitting there with wet hair, foils on your head... unless the outdoor space is private, people probably won't feel comfortable being outside getting their hair done,” she said.

Aside from the possible discomfort of inclement weather or lack of privacy, being outdoors also poses technical challenges when it comes to working on hair, said Dat Tran, who owns Album Hair in Toronto's east and west ends.

“You can't control the temperature when it comes to colour,” he said. “Colour has to be room temperature or it doesn't process really well. I don't think a lot of people understand that aspect of it.”

He said it's likely only a small percentage of salons would be able to move their operations outdoors.

A better solution to help struggling salons would be to designate hair stylists as frontline workers so they could be prioritized for vaccination, Tran said.

Toronto resident Allison Miceli said she hasn't had a haircut since September, and at this point, she would be open to an outdoor appointment if it meant being able to see her stylist.

“It probably sounds like such a first-world problem but... one of the simplest things we can do right now is take care of ourselves and I feel like feeling like you're put together is part of that,” she said.

Miceli said she's been struggling to understand why salons have had to remain closed when some other businesses have reopened in some capacity.

“The government needs to find a solution so people in that field can also return to some sense of work,” she said.

This report by The Canadian Press was first published March 18, 2021.