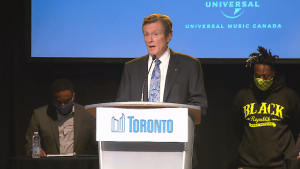 The city of Toronto, along with the Slaight Family Foundation and Advance, Canada’s Black Music Business Collective, are investing $2 million over the next four years to support Black leadership in the city’s music industry.

Mayor John Tory made the announcement this morning from the Phoenix Concert Theatre and said the city and the Slaight Family Foundation are each committing $250,000 a year from 2020 to 2023 to support Black talent development.

“This total commitment of $2 million over four years starting this year will support initiatives aligned with Advance’s four pillars of action: research, advocacy and government partnerships, mentorship and education, community outreach, and business development and entrepreneurship,” Tory said during the press conference.

Tory said the funding will go towards achieving tangible and sustainable change to address the under-representation of Black talent and leadership in Canada’s music scene.

Tory acknowledged that Black artists drive the success of Canada’s music sector but Black professionals are under-represented in management and executive roles in the music industry.

“This isn’t right, it isn’t fair and it actually makes no sense to see the talent and the passion for music present in our Black communities, talent that is globally recognized, but not to see people from those very same communities assuming leadership roles in the ownership and management of Toronto music industry,” Tory said.

An advisory group, including representatives from the Slaight Family Foundation, Advance and the city, will develop initiatives during the four-year partnership.

These efforts include seed funding to support the establishment of Advance, research to assess racial discrepancies in Canada’s music industry, a mentorship and internship program, a pilot initiative to support Black managerial talent development and master classes on music industry career development.

Deputy mayor Michael Thompson was also on hand for the announcement and said the funding will help encourage and sustain the next wave of Black talent and leadership.

“Like much of the cultural sector in Toronto, the music sector is woefully short of Black talent in key industry-making, decision-making and managerial as well as the executive role," he said.

Advance is an organization working to develop an infrastructure for the betterment, upliftment and retention of Black people in the business sector of the Canadian music industry.