Tory has commanding lead over Keesmaat with election just days away: poll 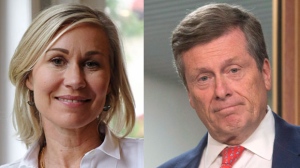 Jennifer Keesmaat and John Tory are seen in this composite image. (The Canadian Press)

John Tory has a 35-point lead over his closest challenger with just three days to go until election day, a new poll has found.

The Dart Insight poll of 669 randomly selected residents was commissioned by the Toronto Sun.

It found that Tory had the support of 62 per cent of likely voters compared to 27 per cent for former city planner Jennifer Keesmaat. About 12 per cent of respondents said that they would vote for one of the other 33 candidates in the race.

Perhaps behind the strong numbers for Tory is a belief by 59 per cent of respondents that the city is on track.

Interestingly, the poll found that despite Tory’s big lead many elements of Keesmaat’s platform do have the support of voters.

Her plan to tear down the eastern portion of the Gardiner Expressway and replace it with a “grand boulevard,” though more contentious, was also supported by the majority of respondents (57 per cent).

Tory has previously criticized Keesmaat for that plan, which he has said would be an example of “going backwards.” Keesmaat, however, has said that it would unlock valuable waterfront real estate and save taxpayers up to $500 million when compared to the council-approved plan to rebuild the eastern Gardiner.

“Cities all over the world are tearing down their elevated expressways,” she told CP24 on Friday morning.

Issues like municipal spending (12 per cent), the economy (19 per cent) and the opioid crisis (6 per cent) were not generally identified as considerations.

The online panel was conducted between Oct. 12-15 and is considered accurate to within 4.3 percentage points, 19 times out of 20.