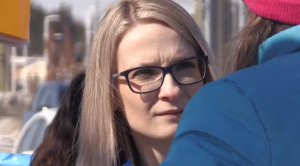 Amy Fee seen here at speaking to a protestor at a demonstration outside her office in March.

TORONTO - A member of Ontario's Progressive Conservative government says she has been facing a year of “tremendous personal struggle” and is seeking help to start a “fresh life.”

Amy Fee, parliamentary assistant in the Ministry of Children, Community and Social Services as well as deputy government house leader, issued a statement late Friday evening saying she's been seeking counselling as she tries to focus on her family and her constituency.

The statement comes amid media reports that Fee, who represents the riding of Kitchener South-Hespeler, has been charged with two counts of assault with a weapon.

Media reports say the charges are contained in court documents, which allege the assaults took place against her husband in September and October of this year.

Fee says in her statement that she looks forward to working with any investigative authorities but does not address reports of the charges.

A spokesperson for Premier Doug Ford issued a statement expressing support for Fee, who is described as “a very important member of our caucus.”