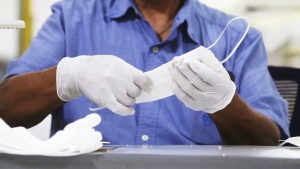 A mask is seen in this undated file photo. (The Canadian Press)

Mayor John Tory says that the city continues to have a “reasonable inventory” of personal protective equipment on hand even in the wake of having to recall more than 60,000 faulty surgical masks that had been distributed to long-term care homes.

The city announced on Tuesday that it would return 4,000 boxes of recently ordered surgical masks after receiving reports of “ripping and tearing” in the product.

The recall came after the city had already delivered about 1,200 of the boxes to at least three long-term care homes, including one that has been dealing with a deadly COVID-19 outbreak.

“People should know that the city has a reasonable inventory. This did dig into our inventory of masks because we counted on those as being proper and they turned out not to be but we have a reasonable inventory,” Tory told CP24 on Wednesday morning. “We have a challenge like everyone else with personal protective equipment but it is not a crisis at this moment in time.”

The city received the shipments of masks on March 28 but did not become aware of the issues with them until workers at long-term care homes started to complain about things like "strings that were breaking," Tory said.

He said that the masks, which were ordered at a cost of $200,000 from a manufacturer in China, weren’t necessarily defective but were not an appropriate product to be used in infection control situations.

He said that going forward the city will take steps to “do some greater measure of quality control” at its warehouses to make sure it is getting the exact products it requires.

“It is a mistake plain and simple and these things do happen. We have tried to react as best as we can and we ae now looking very carefully at the whole question of how it impacted the hard working employees at our long-term care homes and frankly the residents in those places where they got out,” Tory said.

Speaking to reporters on Wednesday afternoon, Tory announced the province would be providing replacement surgical masks to the city.

"It's another example of the good cooperation that has continued between the City of Toronto and the province of Ontario," Tory said.

Fire Chief Matthew Pegg, who is leading the city's response to the COVID-19 pandemic, said a full occupational health and safety investigation has been initiated to ensure any potential impacts are understood and mitigated.

He said about 200 staff from two long-term care homes used the masks.

In addition, he said additional physical inspections and verifications of all incoming PPEs had been put in place by the purchasing and materials management division.

The president of the union representing the city's inside workers said he is concerned about his members and their clients who could have been exposed to the virus due to the defective masks.

The city, meanwhile, has been promised a full refund.

A mask is seen in this undated file photo. (The Canadian Press)