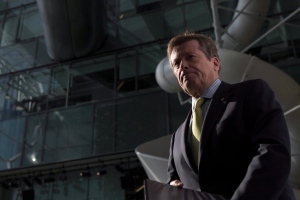 Mayor John Tory steps off the podium after addressing the media at an announcement regarding the expansion of the city's waterfront in Toronto on Friday, February 6, 2015. THE CANADIAN PRESS/Chris Young

Mayor John Tory has announced that he will seek the “permanent cancellation” of the controversial practice of carding during the next meeting of the Toronto Police Services Board.

Tory made the comment during a hastily-called press conference at city hall on Sunday afternoon, noting that carding has “eroded public trust to a level that is clearly unacceptable.”

“It is my intention to see that carding is cancelled permanently and that we start fresh,” Tory said on Sunday.

“The personal stories I have heard in recent months and even before have been building up in my conscience and they have stuck with me, so after great personal reflection I have concluded that time has gone on too long and it is time for me to say enough and to acknowledge that there is no real way to fix a practice that has come to be regarded as illegitimate, disrespectful and hurtful.”

Tory's comments Sunday mark a departure from his previous stance in support of the practice, which opponents have deemed to be racially discriminatory.

In April, the Toronto Police Service Board amended its carding policy to prohibit officers from considering “race, place of origin, age, colour, ethnic origin, gender identity or gender expression” when deciding whether to stop someone for questioning and banned any carding quotas from being put in place by management.

At the time, Tory said that the changes represented an “important landmark in advancing bias-free policing,” however on Sunday the mayor admitted that they didn’t go far enough.

“In light of the stalemate that I inherited when I took office, I believed that some policy that moved us forward was better than the stalemate and the vacuum that I found when I got there,” Tory said. “I thought putting in place some oversight was crucial and I thought that we could make progress on real reform, but that progress was elusive despite the good faith efforts of many.”

"We don't comment on decisions by our civilian oversight body. We will continue to do our best to keep the city safe," Pugash said in a statement emailed to CP24.

Tory's about-face comes five days after a group of prominent Torontonians, including former Chief Justice of Ontario Roy McMurtry, held a press conference at city hall to call for an end to the practice, wherein officers stop and in some cases collect information from people who are not under arrest or suspected of any crimes.

Freelance journalist Desmond Cole, who has been an outspoken opponent of carding, said he believes last week's news conference, which was attended by three former mayors – Barbara Hall, David Crombie and John Sewell, was a tipping point.

"When they spoke out and lent their credibility to this issue, I do feel like that was a huge turning point," he said.

"It shouldn’t have taken all of what we had to do in order to get to this day."

Thank you everyone. Let's savour the moment -- going forward, words must become policy and practice. The struggle for justice continues!

Cole, who generated considerable conversation on the issue after he penned a lengthy feature in Toronto Life magazine in April on his own experiences being carded, said he is "moved" by today's announcement.

"We are not quite at the finish line yet. We still have a lot of work to do," he said.

"I don’t want to see other black people become victims."

Many leaders emerged in fight to end #carding. Clearest & strongest belonged to @DesmondCole. Thank you for making #Toronto better. #TOpoli

The debate about carding in Toronto has been ongoing since a series of stories were published in The Toronto Star two years ago, suggesting that people of colour are 10 times more likely to be stopped and carded than those with white skin.

Martin Lither King: "The arc of history is long but it bends towards justice" ... This is a victory for a more just and equal Toronto

Carding had been under a moratorium since January but was expected to resume under new police chief Mark Saunders, who has defended it as a “valuable tool” to target street gangs.

Now the future of the practice is very much in doubt with both Tory and TPS board chair Alok Mukherjee publically calling for its abolishment.

"Over the next few months I am hopeful that my board colleagues and I can work with Chief Saunders and with the police officers and community to achieve our shared objective of putting in place an approach that will help keep crime low while protecting the fundamental rights of every citizen. The only approach that is acceptable is one that achieves both of those goals," Tory said.

Mukherjee, who spoke out against carding in an op-ed published in The Star Friday, told CP24 that he was "very pleased" with Tory's call to end carding.

"I think the right thing to do is to say you know what, this practice has served its purpose, it has lived its day, let’s move on," he said.

"Let’s put an end to it and let’s build a new process that is more respectful in a very clear way of people’s charter rights and their human rights and that actually truly contributes to a relationship between police and community that is based on trust and confidence.”

TPA "extremely concerned" about the elimination of carding:

Toronto Police Association President Mike McCormack spoke to CP24 shortly after Tory's announcement and said his members are concerned about how the elimination of carding will impact public safety.

When used properly, McCormack claims that the practice is "a valuable tool in policing."

"It contributes to public safety and solving crimes," he said.

The police union head did however admit that carding, while useful, is a "flawed tool" and said he wanted to see how Saunders intended to improve the current policy.

"I think that Chief Saunders was looking at an overhaul of the system," he said.

"I would have liked to have seen what the chief would have rolled out to see if we can solve the issues that way but the mayor has made his decision."

Toronto city councillor Giorgio Mammoliti has sided with McCormack, claiming the mayor's "flip flop" may be putting officers at risk.

The York West councillor said he trusts that police officers are using "proper judgment" when carding and added that the practice is actually needed in the Jane and Finch community, a neighbourhood he represents.

“I hold firm and support the police and their efforts to make sure communities are safe," Mammoliti told CP24.

"I think that all of this is nothing but politics at its best."

Mammoliti defended the practice because he said that he believes carding assists police in their investigations.

But both Mukherjee and former mayor Barbara Hall said Sunday that the police service has never provided details on how carding has helped improve public safety or solve crimes.

"I’ve been working on this issue for a long time and we have often asked the police to explain how it has been such a valuable tool and we haven’t received anything on that," Hall told CP24 Sunday night.

"There are things that are useful investigative tools that our society says are not appropriate, that we don’t accept. We have a charter and rights and freedoms, we have human rights laws... (carding) has been very destructive for individuals and communities."

Mayor John Tory steps off the podium after addressing the media at an announcement regarding the expansion of the city's waterfront in Toronto on Friday, February 6, 2015. THE CANADIAN PRESS/Chris Young