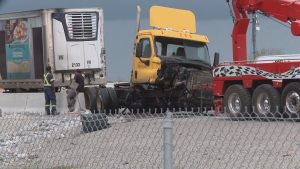 A tractor trailer involved in a wreck on Hwy. 401 near Milton on Monday morning is shown.

All but one eastbound lane on Highway 401 near Milton was closed throughout the morning rush hour on Monday after a tractor trailer slammed into a concrete barrier, resulting in a significant oil spill.

It happened at around 4 a.m. near James Snow Parkway.

Police say that the driver was taken to hospital with minor injuries as a result of the crash.

“The tractor trailer went into a concrete wall on the right side of the highway, ripping off the entire front axle of the truck,” OPP Sgt. Kerry Schmidt said in a video update posted to Twitter. “Unfortunately as a result of this wreck there was a significant diesel and oil spill.”

Schmidt said that most of the oil from the truck  seeped into a catch basin alongside the highway and was removed with the assistance of several vacuum trucks.

The lanes reopened just after 9 a.m.

The cause of the collision remains under investigation.