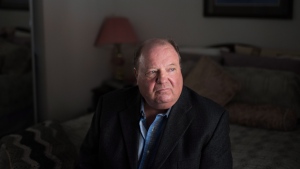 Rick Brown sits for a portrait in his room in Kitchener Ont. on Thursday, Feb.8, 2018. In October 1963, a judge ordered Brown to Brookside, the reform school in Cobourg. The only paper record he still has of his stay there is the Bible they gave him that first day of his year in hell, as he puts it. THE CANADIAN PRESS/Hannah Yoon

TORONTO -- The cracking sound and almost black blood have haunted Rick Brown for close to 55 years, leaving invisible scars and one abiding question: What became of young James Forbes?

The last time Brown saw James is forever etched in his mind -- moments that have stretched into decades.

As Brown tells it, the boys were drifting off to sleep in the darkened dormitory at the provincial training school in Cobourg, Ont., when a supervisor's booted footsteps sounded in the corridor and the lights flipped on. The man walked over to James' bunk bed and ordered him to get up. James refused. Brown, fearing a beating coming, says he whispered urgently to the boy to get up.

"I can remember it like it was yesterday," says Brown, now 64, and living in Kitchener, Ont. "James was terrified. I remember seeing the blankets shaking. He was shaking. His hands were shaking."

The supervisor, Brown says, pulled the hapless lad from bed and "beat the daylights" out of him right there.

"Geez, it's hard to talk about it," he says, his voice breaking on several occasions. "I can recall hearing cracking sounds."

Within instants, the supervisor had scooped the boy from the floor and headed for the door.

"His head was just dangling over (the supervisor's) arm. There was a gurgling sound coming from his chest or his mouth or something," Brown says. "I remember seeing the blood and thinking, 'My God, that doesn't look like blood.' It was almost black."

As he left, the supervisor barked orders over his shoulder to Brown and another boy to get a mop and pail and clean the mess up. They did as told and went to bed and that, Brown says, was the end of James.

For a brief period, he wondered if James, who came from Toronto, was being patched up in hospital someplace. Apart from a few whispers, no one talked about it. They were all too afraid they would be next.

"I never saw James again. We never saw him. We don't know where he went," Brown says. "I have always wondered if James survived that night -- or if he actually died."

A retired insurance salesman, Brown was the product of a dysfunctional family with a brother, sister and an abusive alcoholic father prone to domestic violence. As an eight-year-old growing up in Guelph, Ont., he says, he once threatened to take a baseball bat to his father's head for threatening his mother with a butcher's knife.

Brown became a scrappy street kid, often in trouble, mostly for vandalism and other petty crimes.

In October 1963, a judge ordered him to Brookside, the reform school in Cobourg. The only paper record he still has of his stay there is the Bible they gave him that first day of his year in hell, as he puts it.

One time, another supervisor he calls an out-and-out sadist broke his eardrums in the gymnasium, leaving him with a permanent hearing deficit, he says. The beating happened after the man had already beaten another boy senseless.

"I knew I was next. There's no feeling like it. It's complete terror for a 10-year-old," Brown says. "All I can remember is my head being battered back and forth. Then the excruciating pain when he popped my eardrums. I remember laying on the floor -- I couldn't hear anything -- I was trying to look up at him and everything was spinning."

It was one of many incidents he experienced or witnessed, he says. The legacy of that year of what he calls torture has been hard to shake.

"I went into Cobourg as a regular 10-year-old boy who used to take home flowers to his mother and came out a very damaged 11-year-old troubled boy. I hated authority. I struggled for many years."

Ontario's reform schools for boys and girls aged eight to 16 -- essentially prisons for kids -- operated between 1931 until they were finally shut down in 1984. Many of those sent there were beggars, runaways, truants, or simply deemed "incorrigible."

In December, a survivor of another training school launched a proposed class action against the province seeking $600-million on behalf of everyone sent to 12 of the facilities. The schools were, the unproven lawsuit alleges, festering cesspools of sexual, physical and psychological abuse perpetrated by unsupervised and unqualified staff on helpless kids.

When he heard about the action, Brown demurred. It felt a bit like money grubbing. Besides, he says, lawsuits don't bring people back. Linda Brown, his high school sweetheart and now wife of 46 years, has been encouraging him to sign on. It would be cathartic and help his healing, he finally allows.

A father of two grown girls and a boy, Brown says he has seldom shared his story with anyone apart from his wife. His abiding anger issues -- explosive rages -- are mostly behind him. People now tell him he's a people person, he says, but the "dark side" is still there lurking -- raw, angry emotion that once shot to the surface in an instant with the right provocation.

"I would just explode. It was like a bomb going off," he says. "I was afraid. To me it was like Cobourg all over again. It was survival."

Loretta Merritt, a Toronto-based lawyer with extensive experience in training school lawsuits, says accessing youth records -- some decades old -- generally requires court orders and, of course, abuse was rarely documented. At the same time, Merritt stresses the incidence of false reporting is low. Additionally, many of those who ran the facilities are elderly or dead. Names and dates are long forgotten. Records of coroner death investigations only go back as far as 1965.

For Brown, contact with former attendees who might also have witnessed the James' beating, has been sparse to say the least. As a teen in foster care many years ago, he bumped into one of the Brookside kids. Another time, he saw a TV program where one of the children had gone on to kill someone out west. Otherwise, he says, he's had no contact with any of them.

Brown often wonders what became of them all. But it's about that stubborn, troubled kid James Forbes he most wonders. Maybe someone out there remembers, as Brown does, and knows the answer to the life-long question that haunts him. And then maybe, just maybe, someone might actually do something.

"I'd like to see justice for my friend James," Brown says.