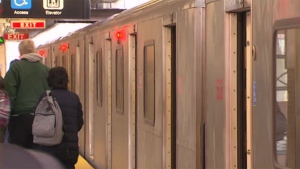 The billions of dollars that is expected to be raised by an increased levy on property taxes could allow the TTC to replace the decades-old subway trains on Line 2 while also ordering hundreds of new buses and streetcars.

The move is expected to result in a $4.56 billion increase in funding to the TTC over the coming years.

In a report that will be considered by the TTC board next week, staff recommend adding a number of items to their 10-year capital plan in light of the new money.

Under the plan about $3.09 billion would be directed to various subway state of good repair initiatives, including the installation of an automatic train control system on Line 2 and the replacement of track and switches that are up to 65-years-old.

The remainder of the money, meanwhile, would go towards replacing some of the TTC’s vehicles that are nearing or at the end of their lifespan.

The report recommends spending $458 million on replacing the 62 subway trains that currently serve Line 2. Those trains are currently 21 to 25 years old and have a design life of 30 years, the report notes.

There is also a proposal to direct another $165 million towards purchasing 18 additional subway trains to handle an expected increase in ridership along Line 1. The report says that the additional trains, combined with other operational improvements, could increase capacity on the line by 10 per cent.

"The injection of additional funds from the city means we can advance some of the critical work outlined in our capital investment plan that was previously unfunded," TTC CEO Rick Leary said in a press release. "The TTC's needs over the next 15 years are a combination of maintaining what we have and preparing for future growth. The city building fund investment allows us to better plan for both."

Money for new buses and streetcars

In addition to the significant investments that will be made in the subway system, the report also calls for hundreds of millions to be spent on new buses and streetcars.

It proposes setting aside $772 million to purchase 614 new buses, which it says will allow the TTC to avoid “what would have otherwise been a significant impact to bus service.”

The report, however, points out that even with the new funding “there will still a shortfall of buses to meet planned service growth and retirements.”

As for streetcars, the report proposes directing another $140 million to purchase 80 new vehicles, which it says will be needed by 2026 given expected ridership growth.

It should be noted that the figures provided by the TTC only represent one-third of the anticipated capital costs associated with the purchases, meaning that the provincial and federal governments will have to come to the table with funding.

In a statement issued late on Wednesday afternoon, Mayor John Tory described the proposed investments as “the most significant investment in upgrading our transit system in the city's history.”

Tory added that he will work “non-stop” to obtain the funding needed from other levels of government in order to carry out the vision in the report.