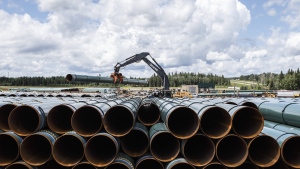 Trans Mountain Corp. has advised construction contractors to get ready for the restart of its pipeline expansion project to the west coast. THE CANADIAN PRESS/Jason Franson

OTTAWA - Construction on the Trans Mountain pipeline expansion project is set to restart in the next month, just in time for the official kick-off of the federal election.

Trans Mountain Corp., the federal crown agency that owns and operates the pipeline, said Wednesday that work on the terminals in Burnaby, B.C. is set to restart immediately, while work laying pipe on the route in parts of Alberta are on track to start within the next month. Construction contractors were told they have 30 days to hire workers, prepare detailed construction plans and mobilize equipment.

Getting construction underway likely leaves many Liberals breathing a sigh of relief, including Sohi, whose riding is just a few kilometres from the Edmonton terminal where the pipeline begins. His already shaky re-election prospects would be even tougher if the pipeline remained stalled.

The federal campaign has to begin no later than Sept. 15 for an Oct. 21 vote, but Sohi said getting shovels in the ground on Trans Mountain has nothing to do with politics.

“I know people want to link this to elections,” he said. “I have never linked it to elections. I always tell that we owe it to Albertans, we owe it to Canadians, energy sector workers and communities who rely on middle class jobs that we get the process right.”

Sohi won in 2015 by less than 100 votes, one of only four Liberals elected in Alberta in the last election. All four seats are considered in play in this election, and anger in Alberta about the struggling oil industry is one of the reasons why.

Sohi visited with pipeline workers on site in Sherwood Park, Alta., on Wednesday. He told them that 4,200 people should be working on the project before the end of the year and the new completion date is in 2022. When the pipeline was initially approved in 2016, construction was supposed to be done by the end of this year.

Sohi also said the construction is going ahead “despite the fearmongering of some Conservative politicians to tell Canadians minutes after we approved the Trans Mountain pipeline expansion that the construction will never happen.”

Edmonton Conservative MP Matt Jeneroux was not impressed with the news.

“Canadians have heard time and time again that Justin Trudeau wants to get pipelines built, yet in four years he has done the exact opposite,” Jeneroux said in an emailed statement.

The Conservatives say the Liberals have killed other pipelines and now have a new environmental assessment process coming in that will ensure no more pipelines are ever approved going forward.

“These decisions are all part of Justin Trudeau's plan to phase out Canada's oil and gas sector,” Jeneroux said.

The federal Liberals approved the Trans Mountain expansion in 2016, but the pressure to bring the project to fruition heightened in May 2018 when the government decided to buy the pipeline for $4.5 billion when Kinder Morgan Canada backed away under the uncertainty of numerous legal challenges and political fighting. The Liberals said the government would buy the pipeline, build the expansion and sell it back to a private investor.

The court decision three months later to rip up approval threw all those plans in jeopardy.

After another round of Indigenous consultations and a new review of the project's impact on marine life off the coast of Vancouver, cabinet green-lighted the expansion for a second time in June.