New data released by the province has provided a clearer picture of who has contracted COVID-19, and how the virus is spreading, though hundreds of cases remain under investigation by public health officials with few, if any details provided.

The data, which was recently uploaded to the province’s open data portal, shows that about 71 per cent of cases where a means of transmission is listed are travel-related (153 cases) and another 22 per cent (48 cases) involve people believed to have contracted the virus from a close contact.

There was, however, still no transmission data for nearly two thirds of the province’s 588 known cases as of Tuesday as public officials continued the painstaking work of contact tracing in order to confirm or rule out community transmission.

Of the travel-related cases listed, most involve individuals who have recently returned from the United States. There are a total of 46 such cases listed in the data, which is more than three times the number of cases that Ontario has seen in individuals returning from the next most commonly listed country - Iran (14 cases). Cruise travel also appeared to be a big factor with it cited in 13 cases.

In total, there are 23 different countries listed under the travel-related cases, though officials sometimes use continental designations like “Asia” or “Europe,” making it difficult to fully ascertain the prevalence of COVID-19 in certain countries based on the data.

Ages are only provided for a little under half of all cases. Of those cases, it appears that there are a higher number of middle-aged people who have tested positive in Ontario, though the data is far from complete. 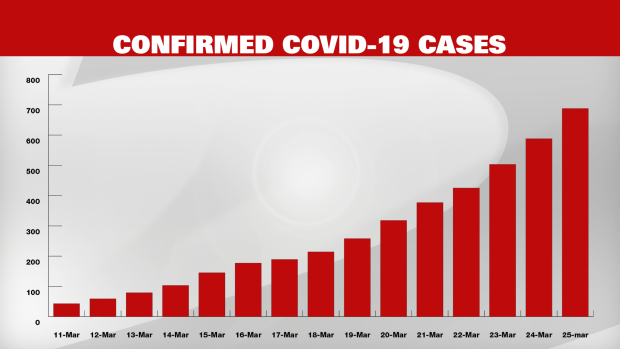 As of Wednesday morning, provincial health officials said a total 55 people have required hospitalization for COVID-19 since the outbreak reached Ontario in late January.