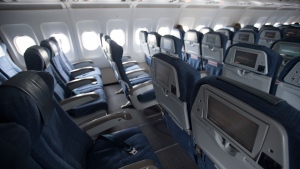 Two air travellers have been fined a combined total of $17,000 for allegedly lying to air crew about their COVID-19 diagnosis and presenting a fake test to dupe border officials.

The unidentified pair arrived at Pierre-Elliot Trudeau Airport in Montreal on a flight from Mexico on Jan. 23.

“In both cases, the individuals knowingly boarded a flight to Canada from Mexico on January 23, 2021, after having tested positive for COVID-19 only a few days before their flight,” federal officials said in a statement issued on Thursday.

One person was fined $10,000 and the other was fined $7,000, under a federal order requiring all air travellers to present a negative PCR COVID-19 test before boarding a flight heading to Canada.

A spokesperson for Transport Canada said in an e-mail to CP24.com that these are the first penalties issued by the agency to passengers found to be non-compliant with the federal order.

“The individuals may contest the administrative monetary penalties before the Transportation Appeal Tribunal of Canada,” the spokesperson said.

Even stricter quarantine rules, requiring incoming air travellers from abroad to self-isolate at a hotel at their own expense for at least three days, take effect in four days.