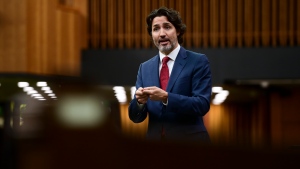 Prime Minister Justin Trudeau rises during question period in the House of Commons on Parliament Hill in Ottawa on Wednesday, June 9, 2021. THE CANADIAN PRESS/Sean Kilpatrick

OTTAWA - Prime Minister Justin Trudeau voiced his support for Harjit Sajjan on Friday after opposition parties banded together in the House of Commons to censure the embattled defence minister.

The prime minister used part of his opening statement during his first COVID-19 update in a week to tout Sajjan's previous service as a police and military officer before accusing the Conservatives of slandering the minister.

“We know there's still much more to be done to protect all of those who choose to serve their country,” Trudeau said during the virtual news conference from his home where the prime minister is in isolation after travelling to Europe.

“So it's unacceptable that Conservative politicians would choose to slander Minister Sajjan's reputation instead of working with us to keep Canadians in uniform safe.”

When asked whether he would fire Sajjan, who has been Canada's only defence minister since the Liberals took power in October 2015, Trudeau replied: “He continues to have my confidence that he is the right person for the job.”

The comments came less than 24 hours after the Conservatives forced a vote in the House of Commons late Thursday on a symbolic motion expressing Parliament's disappointment with Sajjan. The motion passed with support from the Bloc Quebecois and NDP.

All three parties have called separately for Sajjan's resignation.

Sajjan has been under heavy criticism since former military ombudsman Gary Walbourne revealed several months ago that he first flagged an allegation of sexual misconduct involving then-defence chief Jonathan Vance to the minister in March 2018.

Sajjan and the Liberal government have said all proper procedures were followed, and Trudeau said the minister is dedicated to leading the change that many say is necessary to address the military's various cultural shortcomings.

But the Conservatives and some experts say more should have been done with the allegation raised by Walbourne, which Global News has reported relates to a lewd email that Vance allegedly sent to a junior member in 2012, before he became defence chief.

Vance has denied any wrongdoing.

Some have also held the minister responsible for the military's failure to address the broader issue of sexual misconduct in the ranks.

The Conservative motion also criticized Sajjan for his handling of the court case involving vice-admiral Mark Norman and accused him of misleading Canadians about the Liberals' decision to withdraw fighter jets from Iraq and his own service record.

Documents obtained by the Conservatives in 2017 suggested Iraqi officials were upset with Canada's withdrawal of CF-18s from the war against the Islamic State of Iraq and the Levant. That appeared to contradict Sajjan's assurances the decision was well received.

Sajjan was also forced to apologize that same year to Canadian veterans after claiming during a trip to India to have been the “architect” of Canada's largest battle in Afghanistan, Operation Medusa, in 2006.

Several veterans privately expressed their anger at Sajjan's claim. The minister did not say why he overstated his role in Operation Medusa, which also saw 12 Canadian soldiers killed in what remains the bloodiest operation for the Canadian Armed Forces since Korea.

The prime minister's defence of Sajjan came shortly after acting chief of the defence staff Lt.-Gen. Wayne Eyre presided over a change of command ceremony darkened by the military's failure to address misconduct in the ranks.

“These are challenging times for the Canadian Armed Forces, times when we face a serious (and) possibly existential threat not from without, but from within,” Eyre said as Vice-Admiral Bob Auchterlonie was installed as head of the Canadian Joint Operations Command.

“We protect and promote certain values at home and around the world, but it's become ultra-clear we often failed at protecting and promoting these values within our own ranks. And this has come back on us. It has eroded our credibility with Canadians, faith in leadership, and the vital trust that must exist between every member of the Canadian Armed Forces.”