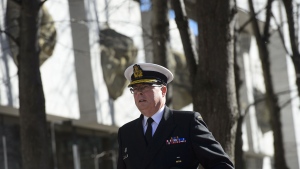 Vice Admiral Mark Norman arrives at court in Ottawa on Tuesday, April 19, 2019. The federal government says it rang up more than $1.4 million in legal costs during the failed prosecution of retired vice-admiral Mark Norman. THE CANADIAN PRESS/Sean Kilpatrick

OTTAWA - The federal government rang up more than $1.4 million in legal costs during the failed prosecution of retired vice-admiral Mark Norman.

Revealed this week by Justice Minister David Lametti in a written response to a question from the official Opposition Conservatives, the figure indication of the financial price of the high-profile and politically charged case.

Lametti did not provide any further details about the costs - including whether the figure included Norman's legal fees, which the government has said it would pay.

“To the extent that the information that has been requested is protected by solicitor-client privilege, the federal Crown can only reveal the total legal costs related to the case,” Lametti wrote in response to the question from Conservative MP and leadership contender Erin O'Toole.

The minister also did not respond to the Conservatives' question about how much the RCMP spent on the original investigation into allegations Norman leaked cabinet secrets about a $700-million federal shipbuilding contract.

That investigation prompted chief of the defence staff Gen. Jonathan Vance to suspend Norman as the military's second-in-command in January 2017. The popular vice-admiral was charged with breach of trust in March 2018.

The Mounties and Crown prosecutors alleged Norman leaked information about the contract to pressure the new Liberal government in 2015 to move ahead with the project to convert a civilian ship into a temporary support vessel for the navy, rather than cancel it.

Norman pleaded not guilty before his lawyers spent months in court fighting the Crown and government for access to thousands of documents they said were essential for ensuring their client received a fair trial.

Throughout the process, Norman's lawyers alleged the case against their client was politically motivated and that Prime Minister Justin Trudeau and his government were interfering in it, a charge that was picked up by the Conservatives and that the Liberals denied.

Crown prosecutors eventually stayed the charge in May 2019, telling the judge that new evidence they'd received from Norman's defence team had led them to conclude there was no reasonable chance of a conviction.

Following the failed prosecution, Norman asserted that he wanted to return to duty. But he and the government instead reached a financial settlement, the details of which have not been made public, before the vice-admiral retired last year.

Conservative defence critic James Bezan said the $1.4 million in legal costs is only part of the real price of what he described as the Liberal government's “witch hunt” against Norman.

“This was taxpayer money and Canadians deserve to know how much was paid in compensation both to cover his costs as well as damages for this malicious mistreatment of vice-admiral Mark Norman, one of our top-ranked officers who was just doing his job.”