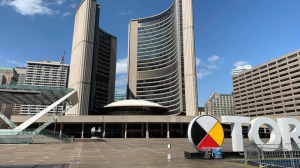 Normally, payments are made in two instalments to over 3,600 communities, first in the summer and then later in the year, but Trudeau says the money is being sent in one shot now.

Speaking outside his Ottawa residence, Trudeau says the money can be used for construction projects to meet local infrastructure needs and put people to work.

Municipalities have seen steep losses in revenues through the COVID-19 pandemic as fewer people pay for transit or parking, and recreation centres stay closed without programs to fill local coffers.

The $2.2 billion is much less than municipalities say they need.

Toronto alone says it's facing a $1.5-billion shortfall this fiscal year and will need to slash services.

The Federation of Canadian Municipalities has estimated the hole in operating budgets across all cities at between $10 billion and $15 billion over the next six months, depending on the severity and duration of the pandemic-related shutdown.

Trudeau says today's announcement is a start and that there is more to be done to support cities, specifically more funding. That will have to happen in concert with provincial governments that constitutionally have responsibility for cities.

Trudeau also says that provinces will have to “step up” to help cities.

“This is just an initial measure that brings forward money that the cities were going to get six months from now, anyway, but there is a need right now for liquidity, for support as they deal with this COVID crisis,” Trudeau said.

“We need to do more and we will do more. But doing more needs to happen hand-in-hand with the provinces who have jurisdiction over municipalities.”