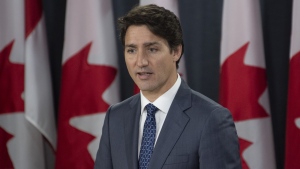 OTTAWA - Prime Minister Justin Trudeau instructed his finance minister Friday to “preserve fiscal firepower” in case the economy tanks - an order that came just as Bill Morneau prepares to issue an update on the state of Canada's economy and the federal government's finances.

Morneau is to issue his annual fall economic and fiscal update on Monday, followed later in the day by a meeting with provincial finance ministers.

Since Parliament resumed late last week, the Conservatives have repeatedly accused Trudeau's Liberals of running the economy into the ground and the government's books deep into the red. Backed by a Statistics Canada report that the economy shed 71,000 jobs last month, Conservatives have asserted that the country is on the brink of a recession and have been highly critical of Trudeau's failure to mention any moves to deal with that possibility in the speech from the throne.

Morneau and Trudeau have played down fears of an impending recession. Both have insisted the government is on the right track by investing in the economy, rather than adopting the Conservative approach, which they describe as cuts and austerity.

“Our approach has been to make investments in our economy, and that approach has clearly been working,” Morneau told the House of Commons on Thursday, predicting Canada's economic growth rate will be among the highest among G7 countries next year.

On Friday, however, Trudeau released the mandate letters he's sent to each of his 36 ministers and Morneau's orders include an instruction to “preserve fiscal firepower in the event that we need to respond to an economic downturn.”

That instruction is one of four “key principles” Trudeau outlines for implementing the Liberals' fiscal plan. The others include continuing to reduce the government's debt relative to the size of the economy, preserving Canada's triple-A credit rating and continuing to invest “in people and the things that give people a better quality of life.”

Trudeau also directs Morneau to conduct a “comprehensive review” of government spending and another review of tax breaks to ensure the wealthy are not disproportionately benefiting.

Each of the mandate letters includes an identical preamble, which stresses the need for each minister to “govern in a positive, open and collaborative way,” reflecting the fact that the Liberals were re-elected on Oct. 21 with a minority of seats and will need the support of at least one of the main opposition parties to pass legislation and survive confidence votes.

The boilerplate preamble does not directly mention the regional divisions exposed by the election, which saw the Liberals shut out in the oil-producing provinces of Alberta and Saskatchewan, but stresses that “it is more important than ever for Canadians to unite and build a stronger, more inclusive and more resilient country.”

It notes that fulfilling many of the Liberals' campaign promises will require co-operation with provincial, municipal and Indigenous partners and says “it is in everyone's interest that we work together to find common ground.”

In an apparent bid to mollify critics who trashed last week's throne speech for failing to specifically mention Alberta and Saskatchewan or the words “oil” or “pipeline,” Trudeau's mandate letter to Natural Resources Minister Seamus O'Regan spells out that his job is to ensure the Trans Mountain pipeline expansion project gets completed, that the energy sector remains a source of good jobs and prosperity and that legislation is advanced to support the future livelihoods of workers and communities hurt by the global transition to a low-carbon economy.

All ministers are advised to conduct themselves in an open, accountable and ethical manner, relying on the advice of professional public servants, working constructively with Parliament, engaging with stakeholders and the public, and responding in a professional, timely way to journalists.

Trudeau advises that this means “humility and continuing to acknowledge mistakes when we make them.”

For the most part, the mandate letters remind ministers of the promises made in the Liberal election platform. Among the highlights:

- Treasury Board President Jean-Yves Duclos is instructed to reduce the time it takes to hire new public servants, to five months from the current average of 10 months.

- Public Services Minister Anita Anand is instructed to create a new target to have at least five per cent of federal contracts awarded to businesses managed and led by Indigenous people.

- Canadian Heritage Minister Steven Guilbeault is instructed to create new regulations for social-media platforms, starting with requiring them to remove illegal content such as hate speech within 24 hours or face “significant penalties.”

- Crown-Indigenous Relations Minister Carolyn Bennett is told to introduce legislation by the end of next year that would implement the United Nations Declaration on the Rights of Indigenous Peoples.

- Health Minister Patty Hajdu is told to impose regulations to reduce the promotion and appeal of vaping products to young people. She is “encouraged to explore additional measures.”

Hajdu is also instructed to work with Parliament to study the possibility of a national dental care program, an issue dear to the hearts of New Democrats.

- Deputy Prime Minister Chrystia Freeland is advised that she'll be supporting Trudeau in hosting a first ministers' meeting “in early 2020.”