Trudeau to meet with U.K. and Japanese prime ministers ahead of G7 summit 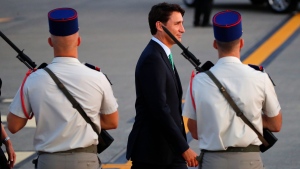 Speaking to reporters today ahead of the G7 summit in the seaside resort of Biarritz, France, Tusk said recent years have demonstrated an increasing tension among G7 nations in finding common ground despite a pressing need for greater co-operation.

"This may be the last moment to restore our political community," Tusk said.

He called on the leaders of the world's seven leading economies to find unity on a number of key issues, including "putting a stop to trade wars."

"Trade wars will lead to recession, while trade deals will boost the economy -- not to mention the fact that trade wars among G7 members will lead to eroding the already weakened trust among us."

Trudeau will meet with British Prime Minister Boris Johnson later today, and their discussions are expected to focus on how Canada's existing trade deal with the European Union will function in a post-Brexit Britain.

It will be the first face-to-face meeting between the two leaders since Johnson took over as prime minister of the United Kingdom in July.

Their talks will offer Trudeau the opportunity to highlight strong Japanese-Canadian ties forged from the successful launch of the rebooted Trans-Pacific Partnership late last year as well as a chance to talk security issues amid rising tensions between Tokyo and South Korea.

But while Trudeau tries to cement plans for a smooth transition in the U.K. of the Comprehensive Economic and Trade Agreement (CETA) -- which set rules for trade between Canada and the European Union -- opposition to CETA in France among farmers and environmentalists has continued.

Isabelle Hudon, Canada's ambassador to France, acknowledged there is a "steep curve in France around trade issues," but says she has been encouraged by an uptick in the number of French businesses using and benefiting from CETA.

"In Canada we are way more comfortable doing trade, for our companies to do trade, internationally and vice-versa," Hudon said.

Host President Emmanuel Macron has downplayed any expectations of a unified front from the leaders of the Group of Seven democracies at the end of this summit.

Instead of a final communique to wrap the summit, Macron is aiming to publish outcome documents for following agreements reached between individual countries on different issues, including free trade, gender equity and the environment -- an attempt to avoid the stormy end of the last G7 summit in Charlevoix, Que., when Trump lashed out at Trudeau from the confines of Air Force One and scratched his name from the 2018 communique.

A final communique is not the most important thing for the G7 summit, Hudon argued. Getting the world's Group of Seven leaders together to speak candidly about issues of joint interest -- even if building consensus has become elusive, is more important, Hudon said.

"There's a shift in what the G7 is becoming. That being said, that's not a reason to stop the conversations."

Tusk said the summit "will be a difficult test of unity and solidarity of the free world and its leaders" but urged G7 leaders to find unity not only on trade, but also on climate action, defending the rule of law and human rights and combating the threat of nuclear proliferation -- rather than focusing on "senseless disputes among each other."